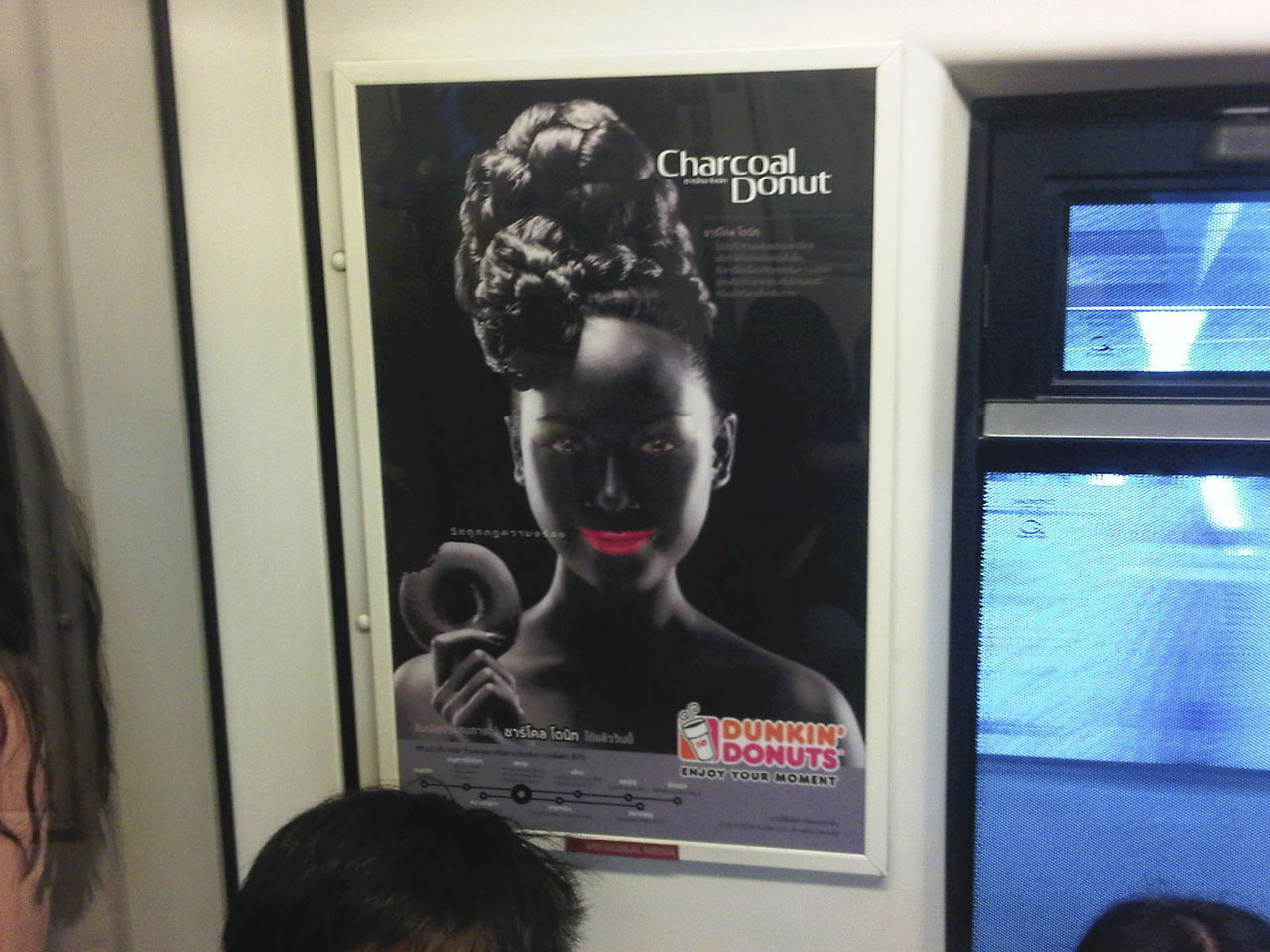 BANGKOK A leading human rights group has called on Dunkin' Donuts to withdraw a "bizarre and racist" advertisement for chocolate doughnuts in Thailand that shows a smiling woman with bright pink lips in blackface makeup.

The Dunkin' Donuts franchise in Thailand launched a campaign earlier this month for its new "Charcoal Donut" featuring the image, which is reminiscent of 19th and early 20th century American stereotypes for black people that are now considered offensive symbols of a racist era.

In posters and TV commercials, the campaign shows the woman with a shiny jet black, 1950s-style beehive hairdo holding a bitten black doughnut alongside the slogan: "Break every rule of deliciousness."

Human Rights Watch said it was shocked to see an American brand name running an advertising campaign that would draw "howls of outrage" if released in the United States.

"It's both bizarre and racist that Dunkin' Donuts thinks that it must color a woman's skin black and accentuate her lips with bright pink lipstick to sell a chocolate doughnut," said Phil Robertson, the deputy Asia director for Human Rights Watch. "Dunkin' Donuts should immediately withdraw this ad, publicly apologize to those it's offended and ensure this never happens again."

The campaign hasn't ruffled many in Thailand, where it's common for advertisements to inexplicably use racial stereotypes. A Thai brand of household mops and dustpans called "Black Man" uses a logo with a smiling black man in a tuxedo and bow tie. One Thai skin whitening cream runs TV commercials that say white-skinned people have better job prospects than those with dark skin. An herbal Thai toothpaste says its dark-colored product "is black, but it's good."

The CEO for Dunkin' Donuts in Thailand dismissed the criticism as "paranoid American thinking."

"It's absolutely ridiculous," said CEO Nadim Salhani. "We're not allowed to use black to promote our doughnuts? I don't get it. What's the big fuss? What if the product was white and I painted someone white, would that be racist?"

Salhani said that the Thai franchise of Dunkin' Donuts operates independently of the American operation and that doughnut sales have increased about 50 percent since the campaign was launched around two weeks ago, which he attributed to curiosity about the new advertisements.

"Not everybody in the world is paranoid about racism," said Salhani, a Lebanese expatriate in Thailand who said his teenage daughter was the model featured in the campaign. "I'm sorry, but this is a marketing campaign, and it's working very well for us."

What Obamacare repeal means for health stocks
Thanks for reading CBS NEWS.
Create your free account or log in
for more features.
View CBS News In
CBS News App Open
Chrome Safari Continue
Be the first to know
Get browser notifications for breaking news, live events, and exclusive reporting.