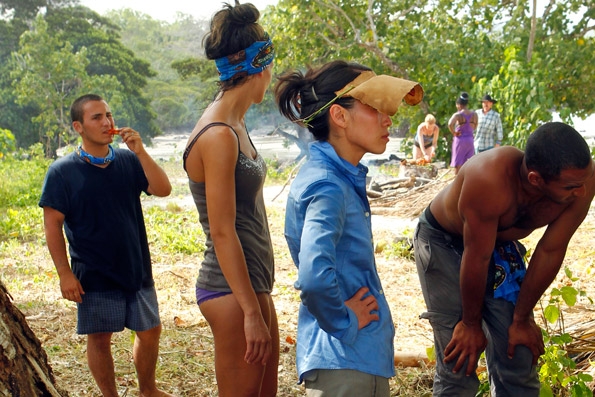 (CBS) Brandon Hantz, nephew of "Survivor" arch villain Russell Hantz, may go down in "Survivor" history himself - for making one of the dumbest moves in the game.

Here are the details on Brandon's incredibly stupid action on "Survivor: South Pacific," as well five other mistakes from past seasons that challenge it for the title of "Dumbest Survivor Move Ever."

Brandon in "South Pacific": Brandon is in the group of five finalists on the fall 2011 season when he wins individual immunity. After praying for guidance, Brandon hands his immunity necklace over to Albert at Tribal Council. Too late, he realizes he could use it himself. Three of his four fellow tribemates voted to oust him. It's the same mistake Erik Reichenbach made four years earlier.

Erik in "Micronesia: Fans Vs. Favorites" : With a one-in-four chance to win a million dollars, 22-year-old Michigan student Erik Reichenbach was convinced that he was not in jeopardy of going home and was persuaded to give his individual immunity necklace to Natalie at Tribal Council. Minutes later, he was voted out.

JT in "Heroes vs. Villains": Completely misreading the Tribal Council votes of the opposing "Villians," JT assumes that a female alliance is underfoot and reaches out to spare the last man standing - villainous Russell, the mastermind behind the Tribal Council votes. JT surreptitiously gives Russell his immunity idol, hoping it will keep Russell from elimination until the merge. At the first Tribal Council of the merged tribe, Russell produces the unused idol and it is subsequently used to send JT home.

James in "China": It was the only time in "Survivor" history that a castaway went home with not one - but two - immunity idols in his possession. Thirty-two-year-old Louisiana gravedigger James Clement apparently felt so confident he never saw this blindside coming. A fan favorite, he won a $100,000 prize as the most popular player and returned for "Micronesia" and "Heroes vs. Villains."

Alex in "Amazon": Los Angeles triathalon coach Alex Bell, in an alliance with Heidi Strobel, Jenna Morasca and Rob Cesternino, told Rob that he was going to take the girls to the final three and would vote Rob off at the end. Rob formed a new alliance and at the next Tribal Council, they ejected a very surprised Alex.

Colby in "The Outback": A three-time "Survivor" also-ran, Texas auto customizer Colby Donaldson made a crucial mistake in his first game by taking super-sweet Tina Wesson with him to the finals instead of much less likeable Keith Famie. Had he voted with his head and not his heart, he'd be a $1 million richer.