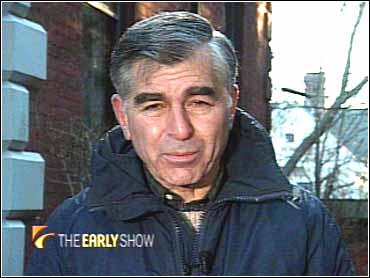 Conceding a presidential election is a bitter pill to swallow. At some point, either George W. Bush or Al Gore will have to concede. And it's going to hurt.

Former Gov. Michael Dukakis, a Democrat from Massachusetts, is one of the few men who have faced such a high-profile loss. He surprised the country when he won the Democratic nomination in 1988 but experienced the agony of concession after losing the election to George Bush in a landslide, winning just 111 electoral votes to Bush's 426.

Dukakis moved on with his life. He finished his term as governor and is now a visiting professor of political science at Northeastern University in Massachusetts and teaches occasionally at several other universities.

CBS Early show Anchor Bryant Gumbel talked to Dukakis about the lessons he learned from losing.

The former Massachusetts governor explained that usually, by the time a politician has reached his campaign for president he has already experienced defeat at some point and has an inkling of what it's like.

"You're very disappointed, but also know that somebody wins and somebody loses. You do what you have to do and you're gracious about it and you go about your business," said Dukakis. "There's life after defeat."

However, he acknowledged that defeat this presidential election might be a little different.

"It's a lot tougher when you have a situation like this," Dukakis said. "It hurts when you lose, but if you lose decisively and unfortunately I did - you're a big boy about it. You know you've lost and you concede and go about your business."

Of his loss, Dukakis said, "It was less of a personal disappointment than the fact I let a lot of people down."

As the race between Gore and Bush drags on some people are saying that Gore is being a sore loser - but Dukakis said Gore "thinks he won. I think he won. ... I think he's very much in this and will continue to be in it unless and until somebody tells him he isn't. At this point there is still a lot of tunes out there for this result to change."

But no matter who wins, Dukakis says the loser has to accept it.

"You've got to be gracious about congratulating the guy that beat you and then you pick up the pieces and move forward."