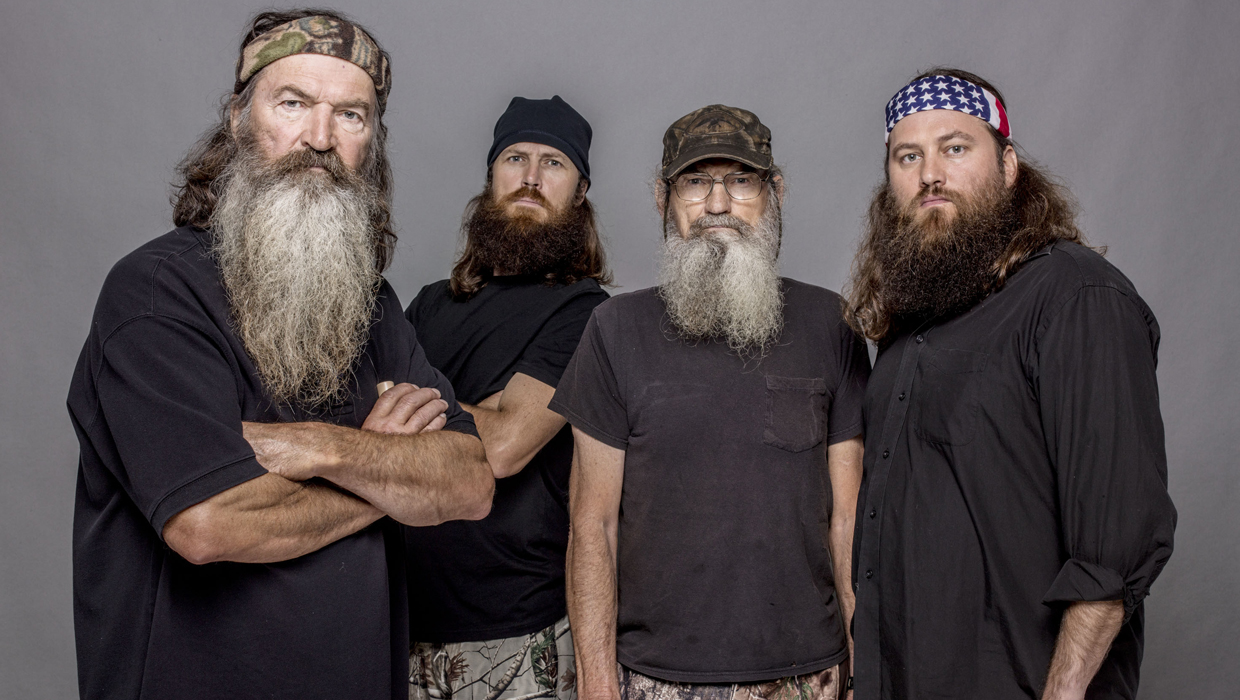 "Duck Dynasty" patriarch Phil Robertson -- suspended from the series indefinitely after making disparaging remarks about gays -- is getting some support from key followers.

Sarah Palin posted a picture on her Facebook page of her with the reality show clan with the message, "Free Speech is an endangered species." She added: "Those 'intolerants' hatin' and taking on the Duck Dynasty patriarch for voicing his personal opinion are taking on all of us."

And Louisiana Gov. Bobby Jindal also lamented the suspension on free speech terms. "It's a messed-up situation when Miley Cyrus gets a laugh, and Phil Robertson gets suspended," said the governor in a statement Thursday (the show is filmed in his state.)

A&E announced Wednesday what it called a "hiatus" for Robertson, 67, after he disparaged gays in the January edition of GQ magazine. He also said that, growing up in Louisiana before the Civil Rights movement, he never saw mistreatment of blacks.

In a statement, A&E said it was extremely disappointed to see Robertson's anti-gay remarks, which it said were based on his personal beliefs and do not reflect those of A&E Networks or the show. A&E Networks, a joint venture of The Walt Disney Co. and Hearst Corp., called itself a supporter of the lesbian and gay community.

The channel's move was lauded by the gay and lesbian media advocacy group GLAAD, which had quickly condemned Robertson's comments.

"What's clear is that such hateful anti-gay comments are unacceptable to fans, viewers, and networks alike," said GLAAD spokesman Wilson Cruz. Robertson's removal "has sent a strong message that discrimination is neither a Christian nor an American value."

Robertson and his extended family became wealthy manufacturing duck calls and were turned into TV and pop culture stars by "Duck Dynasty," which has set cable ratings records for a non-fiction series. Several family members appeared in this year's Macy's Thanksgiving parade.

In his GQ interview, Robertson was asked his definition of sinful behavior.

"Start with homosexual behavior and just morph out from there," such as bestiality, he said.

GQ said he then paraphrases a biblical reference: "Don't be deceived. Neither the adulterers, the idolaters, the male prostitutes, the homosexual offenders, the greedy, the drunkards, the slanderers, the swindlers -- they won't inherit the kingdom of God. Don't deceive yourself. It's not right."

Robertson and his family had no comment on his hiatus, A&E said on their behalf. He may be in some previously taped scenes when the show returns Jan. 15 for its fifth season, a network spokesman said.

Robertson did respond to initial criticism of his GQ remarks.

"I myself am a product of the ‘60s" who indulged in sex and drugs until hitting bottom and accepting Jesus as his savior, he said in a statement. Although his mission is to teach people that men and women are meant to be together, Robertson said he "would never treat anyone with disrespect" because they are different.

In the interview, he also said that in his Louisiana youth he picked cotton with African-Americans and never saw "the mistreatment of any black person. Not once."

"We're going across the field.... They're singing and happy. I never heard one of them, one black person, say, ‘I tell you what: These doggone white people' -- not a word!" Robertson told the magazine.

A&E said it had received no complaints about those remarks.