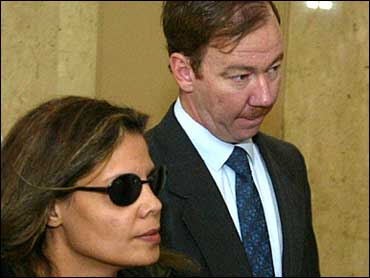 A former police officer was convicted of manslaughter Friday for killing a family of four with his minivan after a 12-hour drinking binge that started in a precinct parking lot.

Joseph Gray, 41, admitted drinking as many as 13 beers before the fatal accident on Aug. 4, 2001, but contended he was still OK to drive.

Gray sat motionless as the jury returned its verdict. He faces up to 15 years in prison at sentencing May 23.

Gray had pleaded innocent in the deaths of Maria Herrera, 24, who was eight months pregnant; her 4-year-old son Andy, and her sister, Dilcia Pena, 16. Gray was also charged with the death of Herrera's baby boy, who was delivered after the accident but also died.

Gray testified that he drank all day after an overnight shift, beginning in the police parking lot and continuing at a Brooklyn strip club that was off limits to 72nd Precinct officers.

He said he felt OK to drive that night and that he was not drunk. Gray's blood-alcohol content was measured at 0.16, well over the legal limit of 0.10. Prosecutors contend he drank 18 beers that day.

Defense attorney Harold Levy conceded that Gray was driving while intoxicated, but claimed his client's high alcohol tolerance gave him the "ability" to drive.

"As hard as it may be to swallow, that's all he's guilty of," Levy said.

Prosecutors said Gray was traveling at least 50 mph and ran a red light before hitting the victims as they crossed a well-lighted street.

Gray, who has three daughters of his own, said he was driving 30 mph and had a green light when the victims walked out from the shadows and into the path of his minivan.

"It's terrible to say to the Herrera and Pena families, but your family members, in part, were responsible for what happened," Levy said during closing arguments Thursday.

Prosecutor Maureen McCormick said the victims were returning from a shopping trip when they were cut down. She called Gray arrogant.

"The evidence shows he was flat-out drunk," she said.

After the accident, Gray resigned after 15 years on the force. Police officials also transferred, suspended or modified the job descriptions of 17 officers from the precinct. Three were later fired.