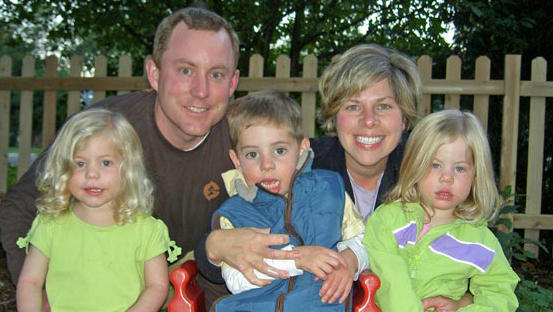 "The days are long, but the years are short."

That's how Jennifer and Tracy VanHoutan, the parents of Noah and Laine and Emily, describe what it's like to have a child with Batten disease, a rare and devastating neurological condition that took their son Noah's life last year at age 11.

Now a new drug, approved this week by the FDA to treat a form of Batten disease called CLN2, may change the course of the disease for other families whose children struggle with the illness. Brineura is the first and only approved treatment for the illness.

The family fought long and hard to help develop the treatment, even as the window for it to benefit their own children closed. Dad Tracy traveled the globe, and they raised more than $250,000 to fund clinical trials. The family founded Noah's Hope, a foundation that will continue working toward a cure.

Laine, now 11, also has the same form of Batten, a genetic condition which is always fatal. She was diagnosed at age 3, just a few months after her big brother. While it's too late for her to benefit from the drug, her mom Jennifer told CBS Chicago, "Knowing families don't have to watch their children have this devastating decline is more comfort than I can explain."

The VanHoutans originally planned to release a balloon on what would have been their son Noah's 13th birthday this year. Instead, they released the balloon into the sky Thursday, in celebration of winning FDA approval for Brineura (cerliponase alfa is the generic name), an enzyme replacement therapy.

In the U.S., only about 20 infants are born with it each year, said de los Reyes, who was involved in the clinical trials.

Children with Batten disease develop normally until about the age of 3, but then devastating symptoms set in.

"Seizures start at approximately 3 to 4 years of age. And there is a combination of language delay and seizures and an abnormal EEG, a brain wave study. As the disease progresses, you lose the ability to walk and by about 5 or 6 years of age, they start to lose their vision," said de las Reyes.

Children with the condition die anywhere from 8 to 12 years of age.

The first children involved in the drug study – which involved medical centers in the U.S., London, Rome, and Hamburg, Germany – were treated approximately four years ago and their disease has not progressed at the typical rate in a child with Batten.

"They continue to maintain and stabilize. Their seizures are better, which is almost unheard of," she said.

As a physician to families coping with Batten disease, de los Reyes says it takes an emotional toll.

"Its robs your children. You see them melt before your very eyes," she said.

"It is very painful. It affects me just as much as it affects parents because I'm close to families. But as a physician, I have to be brave for the families and that's why I do what I do. And now today, with the fact that FDA approved Brineura, it gives me hope for families," she said.

Laine VanHoutan is now fully dependent on her parents for her basic needs. Her fraternal twin, Emily, does not have Batten disease.