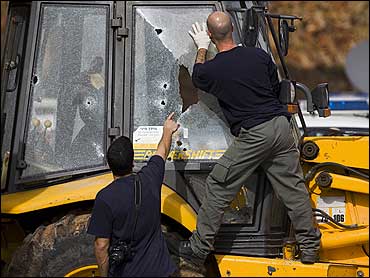 A Palestinian driver rammed a construction vehicle into a bus and police car on a highway Thursday, wounding two officers before he was shot dead, police said - the latest in a string of attacks by militants using heavy machinery against Israeli targets.

Witnesses described a towering yellow front loader speeding along Jerusalem's Begin Highway, a main thoroughfare, dragging the police car, flipping it into the air and trying to crush it with its shovel.

Witnesses said the attacker apparently worked at a nearby construction site. There was no immediate claim of responsibility, though the Hamas militant group that rules the Gaza Strip praised the attack. Police said the man was not carrying identification.

"It was simply an attack meant to murder innocent people," Mayor Nir Barkat told Channel 2 television. He called for the demolition of the attacker's home, a tactic that has drawn international criticism. Barkat said such demolitions are needed to deter other attacks.

The rampage came as Israel prepared to celebrate Purim, a holiday in which schools are closed, children dress up in costumes and families attend parties and public events.

Barkat said the attack would not stop next week's celebrations. "We need to get back to our routine as fast as possible to show the terrorists that they won't ruin our holiday," he said.

One witness, a taxi driver, told Israel Radio he chased the driver as he watched the attack.

"I saw the police car fly into the air. He flipped it over twice, then continued dragging it toward a bus that was stuck in traffic," he said. He told the station he fired four shots at the man, wounding him. "Then a policeman came with his M-16 and finished him off," he said.

Deputy police chief Nisso Shachar said the attacker was first spotted by a traffic police car. "The officer saw the bulldozer lift up a police squad car with its shovel after trying to squash it," he said. "It is without a doubt a terror attack."

Police said the two wounded officers were lightly hurt. The bus was not carrying passengers.

Shachar said the man was killed and an open copy of the Quran, Islam's holy book, was found in the vehicle. He said the presence of the book indicated the attacker was affiliated with or influenced by Islamic radicals.

In the Gaza Strip, Hamas praised the attack. "We bless this operation today in Jerusalem," said spokesman Fawzi Barhoum. "The Palestinian people have the right to defend themselves, and we emphasize we will defend our homeland."

It was the third bulldozer attack in Jerusalem in the past eight months.

In September, a Palestinian driver rammed his car into a crowd of Israeli soldiers, wounding 19 people, before he was shot dead.

All of the attackers were from east Jerusalem, where Palestinian residents hold Israeli ID cards and can move freely about Israel.

The attack came amid a new surge in fighting in the Gaza Strip, about 50 miles (80 kilometers) southwest of Jerusalem.

An Israeli air strike early Thursday killed two Islamic Jihad militants and wounded another, bringing to four the number of group members killed by Israel in less than 24 hours.

Islamic Jihad said the three men were returning to a refugee camp in central Gaza after a night on patrol along the Gaza-Israel border.

The Israeli military said the men fired an anti-tank missile at troops on the Israeli side. No soldiers were reported injured.

"Our rockets and our resistance will not stop," Islamic Jihad official Abu Ahmed said. "We know where and when we will take revenge for these crimes."

Later on Thursday, three rockets fired from Gaza landed in empty ground in southern Israel, the military said. The military responded with two airstrikes on a suspected weapons-smuggling tunnels in southern Gaza. No injuries were reported.