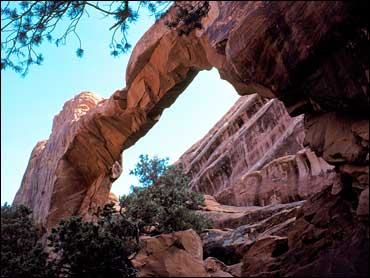 In a high-profile reversal of the Bush administration, Interior Secretary Ken Salazar said Wednesday the government is scrapping the lease of 77 parcels of federal land for oil and gas drilling in Utah's redrock country.

"In the last weeks in office, the Bush administration rushed ahead to sell oil and gas leases near some of our nation's most precious landscapes in Utah," Salazar said from Washington in a teleconference call with reporters.

He ordered the Bureau of Land Management, which is part of the Interior Department, to not cash checks from winning bidders for parcels at issue in a lawsuit filed by environmental groups.

The sales were worth $6 million to the government in addition to royalties on any oil or gas production.

"We will take time and a fresh look at these 77 parcels to see if they are appropriate for oil and gas development," Salazar said.

A federal judge put the sale of the 77 parcels on hold last month until the lawsuit was resolved. Now, Salazar is refusing to sell any of them - at least until the new administration has a chance to take a second look.

Conservation groups promised to press ahead with the lawsuit to challenge long-term management plans that made the sale of the parcels possible in the first place. The plans, governing 7 million acres of public land in Utah, were approved by the BLM last year.

Among critics of December's lease auction was actor Robert Redford, who owns Sundance ski resort and has spent a lifetime on horseback in southern Utah's canyons.

"I see this announcement as a sign that after eight long years of rapacious greed and backdoor dealings, our government is returning a sense of balance to the way it manages our lands," Redford, 71, said in a statement Wednesday.

Salazar said some of the 77 lease parcels are too close to Arches and Canyonlands national parks and Dinosaur National Monument, all in Utah. Other leases taken off the table were on the high cliffs of whitewater sections of the Green River through Desolation Canyon.

The National Park Service protested the Dec. 19 auction weeks before it was held, and the BLM removed some parcels from the auction list in response.