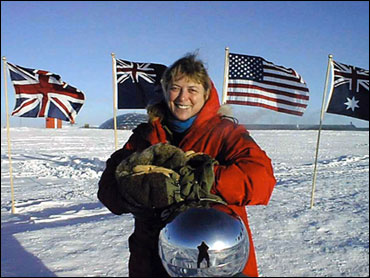 Dr. Jerri Nielsen FitzGerald, whose struggle against breast cancer during a winter at the South Pole captivated the world, has died. She was 57.

Her husband, Thomas FitzGerald, says she died Tuesday at their home in Southwick, Mass. The cause was cancer.

Nielsen was the only doctor at the Amundsen-Scott South Pole Station when she found a lump in her breast in June 1999, raising fears of cancer. Weather conditions didn't permit a rescue, so she performed a biopsy on herself with the help of staff.

She began treating herself using drugs dropped by parachute in the dark polar winter in July, in a mission documented by CBS News.

Despite her illness Nielsen kept busy with her duties up until she left the South Pole, her sister-in-law, Diana Cahill, told CBS News in 1999.

"She didn't have time to focus on her condition at all. She's a very giving person," Cahill said.

Following the dramatic airlift, she told The Vindictor newspaper she wanted to return to the Antarctic.

"It was such a wonderful place. I still love it. I would do it again. Even knowing what happened to me, it was the best year of my life," Nielsen told the newspaper.

Her cancer went into remission until 2005.