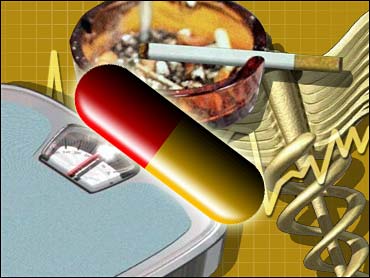 A pill that helps you lose weight and quit smoking? That was amazing enough to capture headlines last week. But scientists say the experimental drug might be even more versatile, providing a new tool to help people stop abusing drugs and alcohol, too.

It's called rimonabant, or Acomplia, and last week researchers reported it could help people not only lose weight but keep it off for two years.

That burnished the drug's reputation after two studies in March, which suggested it could fight both obesity and smoking, two of humanity's biggest killers.

But the drug's benefits may go beyond just smokers and obese people, researchers say.

"I think it's going to have a big impact on the treatment of addiction," said Dr. Charles O'Brien, an addiction expert at the University of Pennsylvania and the Philadelphia Veterans Affairs Medical Center.

Animal studies suggest rimonabant can block the effects of marijuana and fight relapse in alcohol and cocaine abuse, he said. Once it is approved for treating obesity or smoking, "we'll be free to study it in these other areas and I'll try to get my hands on it as quickly as possible," O'Brien said.

He's not alone in his enthusiasm.

The National Institute on Alcohol Abuse and Alcoholism is interested in seeing whether rimonabant can help treat heavy drinkers, said Dr. George Kunos of the institute. No human test results for rimonabant in alcohol abuse have yet been published, he said.

But researchers at the National Institute on Drug Abuse reported in 2001 that a single dose of the drug could block the effects of smoked marijuana in people, not just animals. That suggests the drug could be useful in treating marijuana dependence, said Marilyn Huestis, principal investigator of the study. The institute is now pursuing follow-up research, said Huestis, acting chief for chemistry and drug metabolism research at NIDA.

Rimonabant's versatility traces back to its effects on the brain's reward system, circuitry that tells you to keep on doing something. Basically, it appears to help break the connection between an activity like smoking and the rewarding feeling it causes in the brain.

The body has its own marijuana-like substances called endocannabinoids, and they activate certain brain cells that in turn can lead to stimulation of the brain's reward system. Pleasurable things like drinking alcohol are thought to activate a feeling of reward by acting through the endocannabinoid system.

"We think that the (endocannabinoid) system is overactivated by chronic smoking, or perhaps even excessive overeating," said Dr. Robert Anthenelli of the University of Cincinnati College of Medicine and the Cincinnati Veterans Affairs Medical Center. He's on the advisory board of Sanofi-Aventis.

Rimonabant blocks the effect of the natural endocannabinoids by keeping them from latching onto the brain cells they normally stimulate, he said. In smokers, for example, that seems to restore the natural balance of the brain reward circuitry, he said.