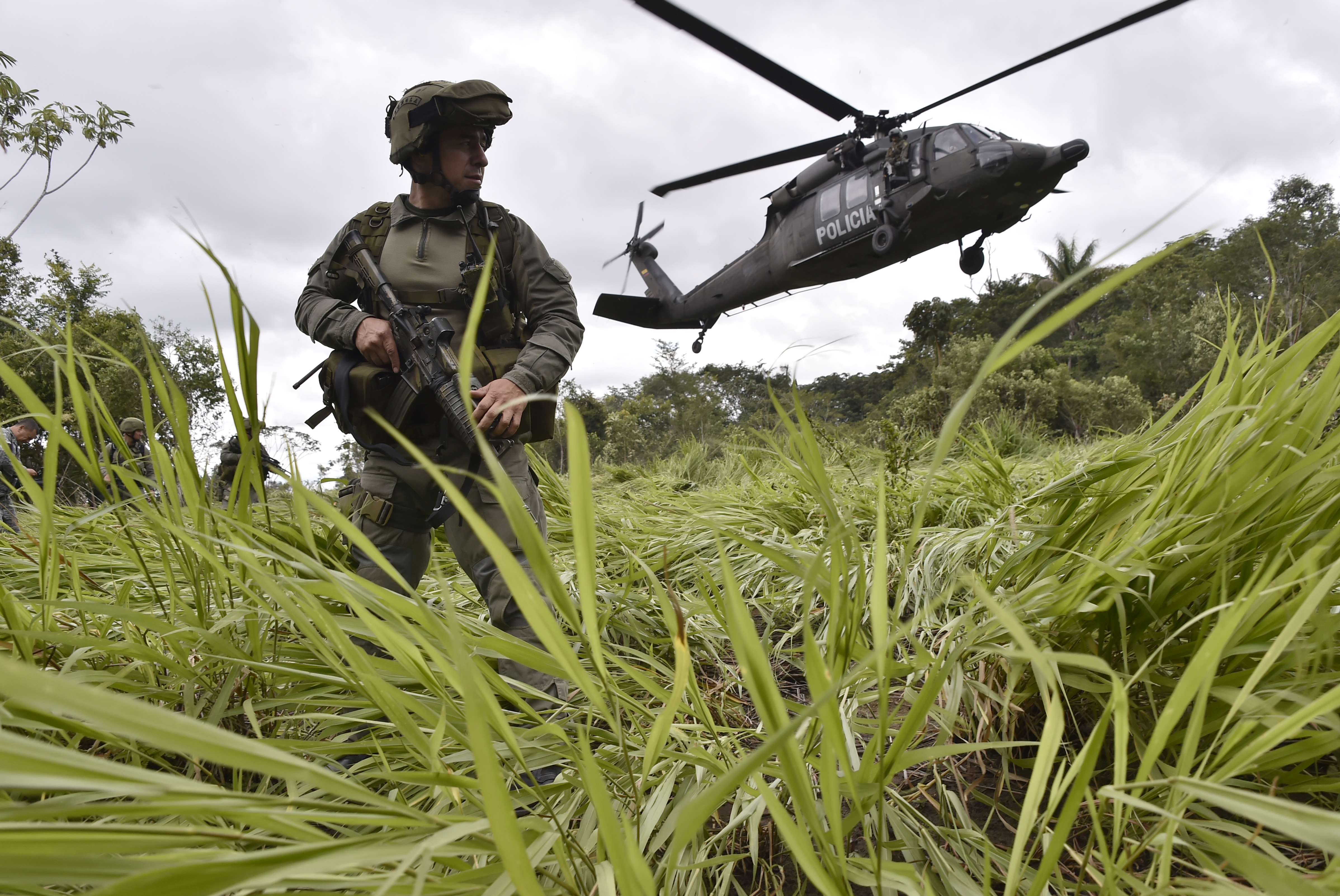 BOGOTA, Colombia -- U.S. President Donald Trump is threatening that he may decertify Colombia as a partner in the war against drugs unless the South American nation reverses a record surge in cocaine production.

Colombia, the source of 90 percent of the cocaine consumed in the U.S., has long been a fixture on the list, which was unchanged from last year. But not since the late 1990s, when contributions from the Cali cartel funded the campaign of Colombia's then-President Ernesto Samper, has the country's commitment to fighting narcotics trafficking been called into question by Washington.

Twenty-two countries were designated by the U.S. as major drug transit zones Wednesday, and only Venezuela and Bolivia were deemed once again not to be fulfilling their international obligations to combat drug production and trafficking. The leftist governments of both those nations are hostile to the U.S.

Yet, in a statement, Trump said he "seriously considered" also decertifying Colombia because of the "extraordinary" growth of coca cultivation and cocaine production to record levels over the past year.

He said he decided against such a designation because the Colombian armed forces are close law enforcement partners with the U.S. He also cited improving interdiction rates and the restarting of forced eradication efforts that were significantly curtailed in 2013, when President Juan Manuel Santos prioritized reaching a peace deal with leftist rebels heavily involved in the drug trade.

Two years later, Santos ended the aerial spraying of chemicals on illicit crops, a program that had been the backbone of almost two decades and $10 billion of U.S. counter-narcotics work in Colombia.

But Trump warned that he would keep decertification as an "option" and expected Colombia to make "significant progress" in reducing coca cultivation and cocaine production.

Vice President Mike Pence also told the president of Colombia in August that he is very concerned by the "dramatic increase" in cocaine production.

Santos' government said no other country has paid such a high price in terms of the loss of human life combatting drug-trafficking as Colombia but other countries, especially consuming nations like the U.S., need to do more to attack the problem as well. It said Colombia seizes 44 tons of cocaine for every ton that the U.S. has interdicted on its southern border with Mexico.

"Without a doubt, Colombia is the country that has had the biggest success and has most combatted drugs," the government said in a statement Thursday. "Nobody has to threaten us to confront this challenge."

Adam Isacson, an analyst at the Washington Office on Latin America, described Trump's threat as a "huge mistake" that would likely reverberate throughout a region that has long resented the U.S. drug certification process as a throwback to the days of gunboat diplomacy.

"The message to the rest of the region is that no matter how many years you collaborate with the U.S., if you deviate from our preferred strategy for a moment, we'll publicly humiliate you," Isacson said. "They're taking the bilateral relationship to its worst place in two decades."

The drug certification process dates from the days of President Ronald Reagan's war on drugs. The last time Colombia was blacklisted was in the late 1990s, when cocaine was found on Samper's presidential plane and he was nearly impeached for campaign contributions from the then-dominant Cali cartel.

Decertifying Colombia would put the country in the same rogue category as Venezuela, where several top officials have been indicted on U.S. drug charges and whose vice president was recently sanctioned by Washington as a suspected drug kingpin.

Isacson said the threat of decertification was even more worrisome because the U.S. expressed no similar concern over the lack of help it was receiving from far more corrupt nations on the list like Honduras, a major way station for South American cocaine working its way up by land across the border and into the U.S.

According to the State Department's annual anti-narcotics report, the Central American nation didn't carry out a single maritime interdiction last year and seized just 803 kilograms of cocaine nationwide. That's despite more than 100 instances where the U.S. notified authorities of suspicious activity.

In contrast, bilateral maritime counter-drug cooperation between Colombia and the U.S. led to the seizure of more than 146 metric tons of cocaine in 2016. Overall, Colombia seized 421 metric tons last year, a 42 percent jump over 2015.

But the record drug seizures aren't keeping pace with the explosion in cocaine production, which the U.S. estimates surged more than 200 percent since 2013 to potentially 710 metric tons last year.

The government's strategy to combat that trend relies heavily on the cooperation of former guerrillas. Under terms of last year's peace deal with the Revolutionary Armed Forces of Colombia, the government and former insurgents are working with peasant families to try and voluntarily eradicate some 123,000 acres (50,000 hectares) of coca this year in exchange for monthly cash stipends and alternative development projects.

U.S. officials, who still consider the disbanded FARC a terrorist organization, are skeptical the strategy will work. A senior U.S. State Department official in Senate testimony this week accused the FARC of co-opting the peasant groups negotiating with the government and said the peace accord has had no effect on coca production trends.

"The solution to this problem is to figure out how to cut the FARC out of having any engagement either as trafficking organizations or as allegedly supporting the efforts to address the drugs issue," William Brownfield told the U.S. Senate's international drug caucus.