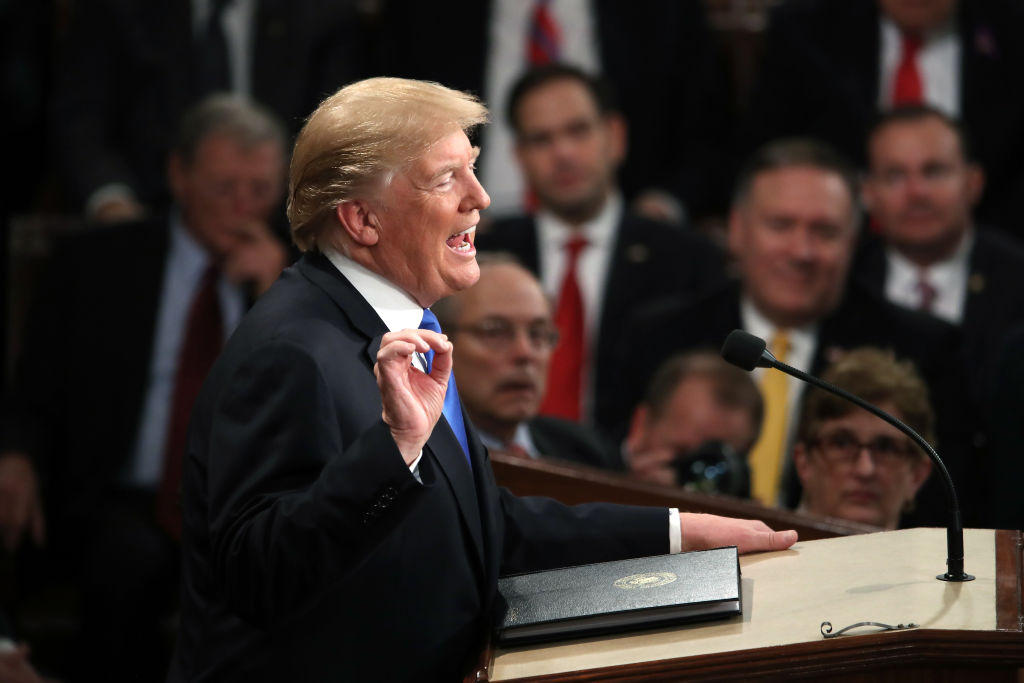 SEOUL, South Korea -- President Donald Trump's fiery comments on North Korea reflected confidence that his campaign of pressure and sanctions on the country is working, South Korean analysts said Wednesday, as China lashed out again at what it considers to be a "Cold War mentality" in Washington.

In his first State of the Union address, Trump warned that North Korea would "very soon" threaten the United States with nuclear-tipped missiles.

Mr. Trump also warned of the dangers from other "rogue regimes," like Iran, terrorist groups, like the Islamic State of Iraq and Syria, and "rivals" like China and Russia "that challenge our interests, our economy and our values." Calling on Congress to lift budgetary caps and boost spending on the military, Trump said that "unmatched power is the surest means of our defense."

Du Hyeogn Cha, a visiting scholar at Seoul's Asan Institute for Policy Studies, said that for North Korea, it has to hurt that Mr. Trump declared the country as a regime that cannot co-exist with the founding values of the United States.

"He made it clear that his 'maximum pressure and engagement' policy will continue to be the only way going forward," he said. "It was probably the worst message he could deliver to the North without issuing a direct military threat."

News of the speech was not immediately broadcast in North Korea on Wednesday, which is not unusual. It often takes a day or more before the North responds officially and few North Koreans were likely even aware that Mr. Trump was to make a major address before the nation and the world.

The North's state-run media has, however, amped up its anti-U.S. rhetoric lately, accusing Washington of trying to create tensions ahead of the Pyeongchang Winter Olympics. Pyongyang has also stepped up its warnings that the U.S. is preparing for a possible war by sending aircraft carrier battle groups and advanced stealth bombers and fighters to the region.

In Beijing, China called on the U.S. to drop what it terms a "Cold War mentality and zero-sum ideology," rhetoric Beijing had used previously to criticize the White House's policies. Mr. Trump's passing reference to China as a "rival" was his only mention of the Asian superpower during his speech.

Foreign Ministry spokeswoman Hua Chuying said that common interests outweigh differences between the sides and the U.S. should view the relationship "correctly."

China's $275 billion trade surplus with the U.S. has been a constant source of tension, alongside their growing rivalry for military supremacy in Asia and accusations of intellectual property theft.

Iran's Foreign Minister Mohammad Javad Zarif said that Mr. Trump has confirmed his "ignorance" in remarks on Iran in his address.

In his speech, President Trump referenced recent unrest in the Islamic Republic, saying: "When the people of Iran rose up against the crimes of their corrupt dictatorship, I did not stay silent. America stands with the people of Iran in their courageous struggle for freedom."

Zarif tweeted: "Trump again confirms his ignorance of Iran & region. Everyone knows where he stands; and it's certainly not with Iranians."

Rouhani said in remarks broadcast by state TV: "The Iranian nation will never give up Imam Khomeini's legacy; Islamism and Republicanism. Return is impossible."

In the Philippines, Defense Secretary Delfin Lorenzana told The Associated Press that it did not really matter that Mr. Trump failed to mention U.S. policy on the South China Sea disputes involving China, the Philippines and four other governments, but that Manila would lend its support to fighting terrorism whenever the efforts of the two nations coincide.

"If our efforts against terrorists coincide, well and good, we cooperate," he said. "But in reality, each country will be addressing its own security problems by any legal means at its disposal."