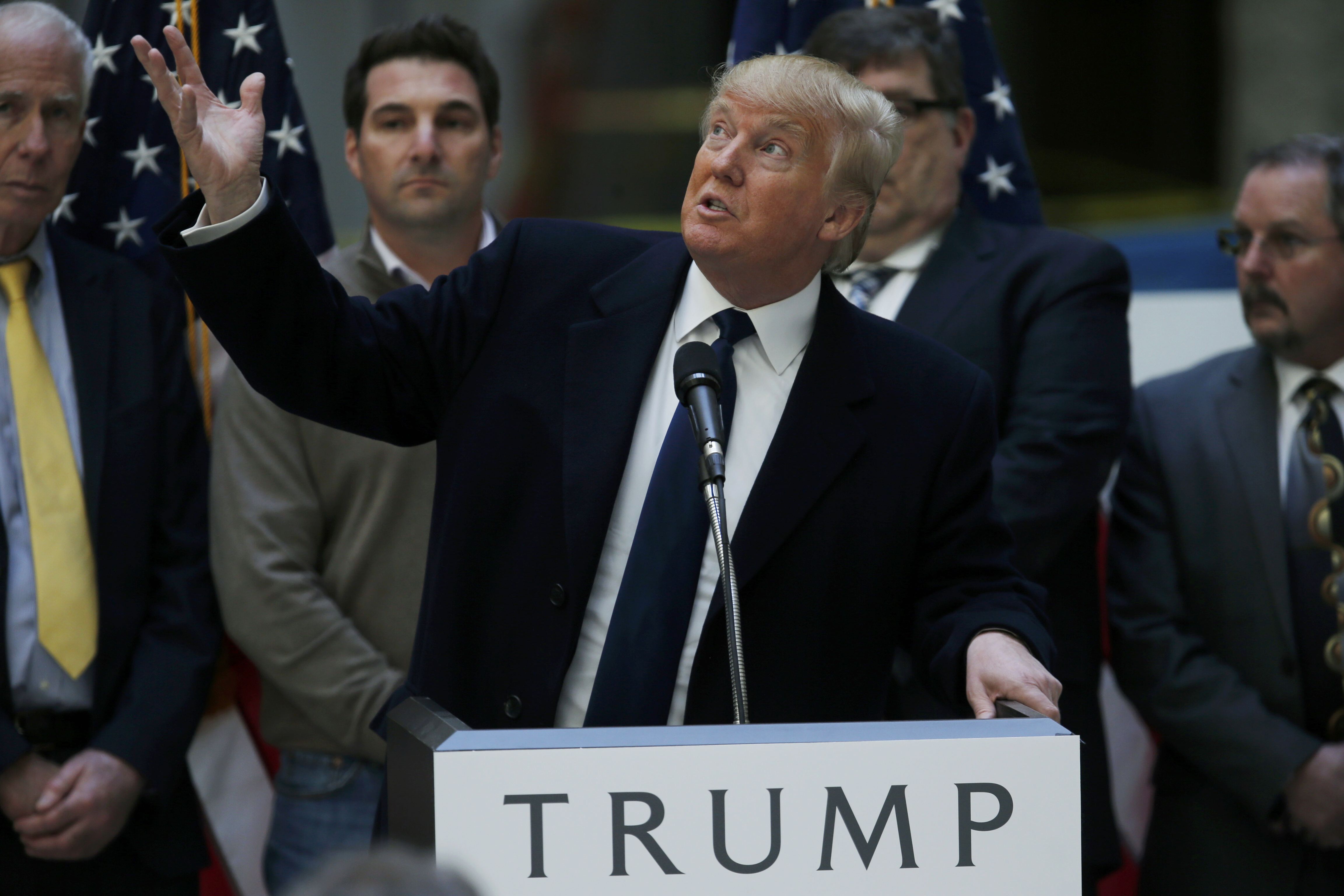 Republican front-runner Donald Trump was part candidate and part real-estate developer Monday afternoon at a press conference at the site of his new D.C. hotel, answering questions on the state of the 2016 race and offering up praise for the quality of the marble and the size of the ballrooms in the upcoming hotel.

During the 40-minute, freewheeling event, the candidate referred to Massachusetts Sen. Elizabeth Warren as "the Indian," offered a woman in the audience a job and brought her up in front of the crowd, and predicted that he will "easily" reach the 1,237 delegates required to win the Republican nomination outright.

"I think we're going to maybe easily make that number of the 1,237," he said. "We should make it pretty easily based on what I'm seeing, so we shouldn't have to worry about fighting at a convention."

Trump currently leads the GOP field with 676 delegates, but anti-Trump forces are hoping to deny him the nomination by keeping him below 1,237 and then defeating him at a contested convention.

"They can't believe how far we've come because I think a lot of people maybe wouldn't have predicted that," he said. "It's a beginning meeting, but it was a very good one with a lot of the most respected people in Washington."

He also took a swipe at Texas Sen. Ted Cruz, saying Cruz also wanted Sessions's endorsement. "Ted Cruz still doesn't believe what happened," he said. "...It doesn't say much about somebody when you have almost no Senate endorsements... and you work with the people all the time."

Trump saved some of his displeasure for Massachusetts Sen. Elizabeth Warren, who took to social media earlier Monday to denounce him and call him a "loser." Asked about her comments, Trump replied, "the Indian?" It was a reference to the controversy over Warren's Native American heritage during her Senate campaign.

"People like Elizabeth Warren really have to get their act together because [the country] is going to stay divided," he said.

As for the violence at his rallies that has intensified in recent weeks, Trump merely said the people supporting his campaign are good people and placed the blame solely on protesters.

Midway through the press conference, Trump called on a woman who asked him whether the hotel would be hiring veterans. Trump immediately pulled the woman named Alicia Watkins -- who later identified herself as a retired Air Force staff sergeant -- in front of the crowd, saying she "made an immediate impression" and said he wanted to offer her a job.

"If we can make a good deal in the salary she's going to probably have a job," he said, as the woman hugged and kissed him on the cheek.

Watkins told CBS News' Julianna Goldman that she was a network engineer at the Pentagon during the 9/11 terrorist attacks. Watkins has been a beauty pageant contestant and over the weekend appeared in TLC's "Say Yes to the Dress." She said she was attending the Trump news conference as a blogger for Troops Media, which was confirmed by Trump communications director Hope Hicks. CBS News could not verify the existence of this site.

The presser also served as free promotion for Trump's new hotel. As the event opened, Trump spoke solely about the hotel, noting that it's slated to open in September and that, "as people who love this country, you're going to be very, very proud of it."

And then at the end, as he started to walk away, Trump turned back to the podium and said: "Nobody asked about the hotel!" He then proceeded to take dozens of members of the political press corps on a tour of the construction site for the hotel.