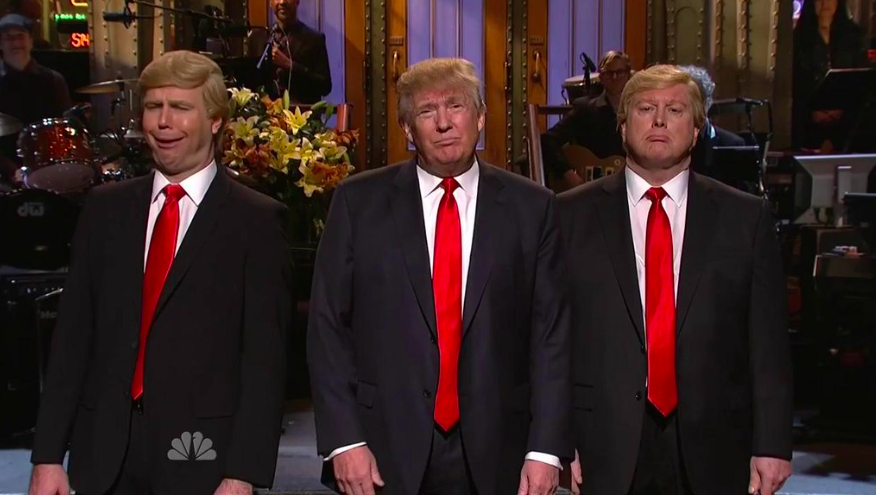 Republican presidential candidate Donald Trump's monologue on "Saturday Night Live" was interrupted by a shout from offstage: "Trump's a racist!"

It was comedian Larry David, who was at the studio making his second appearance playing Democratic presidential candidate Bernie Sanders.

"I heard if I did that they'd give me $5,000," David responded, a nod to the fact that a group called Deport Racism had offered $5,000 to any audience member who called Trump a racist because of his past remarks about Latinos.

"As a businessman I can fully respect that," Trump responded to David.

The group later tweeted it had paid David:

Trump's appearance drew criticism from Hispanic lawmakers and advocacy groups, who had called on NBC to disinvite the presidential candidate because of remarks he has made about Latinos. During his presidential announcement speech in July, Trump called Mexican immigrants rapists and criminals, which caused several businesses including NBCUniversal to sever their business relationships with him.

"A lot of people are saying 'Donald you're the most amazing guy, you're brilliant, you're handsome, you're rich, you have everything going, the world is waiting for you to be president so why are you hosting Saturday Night Live? Why?'" he said during the monologue. "And the answer is I have really nothing better to do."

The first sketch after the monologue featured Trump in the Oval Office as if he had won the presidency in 2016. A series of advisers give him updates about the rosy state of the world -- the war in Syria has ended, Putin has withdrawn from Ukraine because he didn't like being called a loser -- and an actor playing the Mexican president showed up to write Trump a check for the wall on the southern border, fulfilling one of Trump's campaign promises.

His daughter Ivanka Trump even made a cameo to update her father on the progress of covering the Washington Monument in gold mirrored glass.

Near the end of the sketch, Trump turned to the audience and said, "If you think that's how it's going to be when i'm president, you're wrong. It's even better...I said to the writers of this sketch, 'Keep it modest."

Another sketch featured fake Trump tweets on screen as the cast performed a sketch in an Italian restaurant.

"This sketch is not funny. @TaranKillam is a dumb loser," read one. "Kate McKinnon was born stupid," said another

"An extremely credible source just told me that Kenan Thompson's birth certificate is a fraud," read one. "Sorry folks, but add a 'y' to 'Kenan and you get 'Kenyan,'" the tweet said.

One cast member, Leslie Jones, got a kind tweet: "I have tremendous respect for Leslie Jones. She's a winner," the one-screen message said.

But then, when she thanked him, he wrote, "Thanks Leslie. And I love the blacks."

He appeared in a number of other sketches, including one mocking musician Drake's dancing in his recent music video, "Hotline Bling." He also played a member of a band who plays the laser harp in one skit and a music producer in another.

'We want to make sure that all the presidential candidates understand that our communities are watching them, and to stop all the bad comments being made about the immigrant community," Antonio Alarcon, a 21-year-old activist from Make the Road New York who helped organize the protest, told CBS News.

Tomas Perez, a 21-year-old with the League of United Latin American Citizens, traveled from Washington, D.C. to New York to protest Trump's appearance.

"We find it offensive that his hate speech is found hilarious enough for him to be put on to host SNL, which is known for its comedy. Hate speech is not comedy," he told CBS News. "It's not okay for it to be spread. It's something holding back America as a nation in order for us to become essentially one people. This land is built on immigrants. The fact that he's now hosting the show is basically supporting his message."

It was Trump's second appearance on the show. He first hosted in April 2004 when he began his role on NBC's television show, "The Apprentice."

NBC aired several spots promoting Trump's appearance before the show, including one in which he called Republican rival Ben Carson "a complete and total loser." It was reportedly not supposed to air.