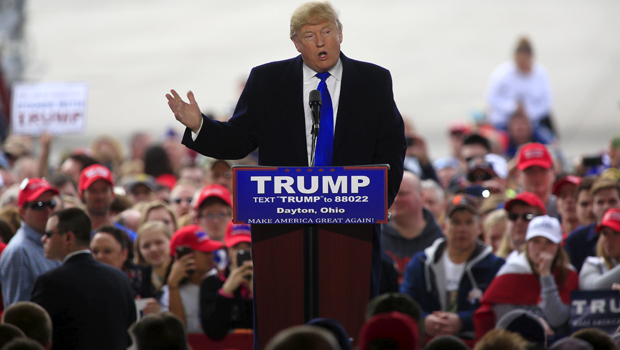 Donald Trump addressed Friday's violent Chicago rally during a campaign event in Dayton, Ohio, shifting much of the blame for the violence to Bernie Sanders' supporters, who Trump said "taunted" and "harassed" his fans.

"So what happened yesterday was incredible," Trump said Saturday. "It was determined that if we go in, it could cause really bad, bad vibes, and you have to understand they want me to tell my people, 'Please, be nice, be nice.' My people are nice! The people that came there were so nice."

Those "thousands and thousands" of his supporters, he said, "caused no problem."

"They were taunted, they were harassed by these other people. These other people, by the way, some represented Bernie, our communist friend," Trump said. "With Bernie, he should really get up and say to his people: stop. Stop. Not me, stop. They said Mr. Trump should get up, this morning, and tell his people to be nice. My people are nice folks -- they are. They're great, they're great, my people are great."

Trump, in a statement Saturday, said that the Chicago Police Department had been "informed of everything before it happened."

But according to a CPD spokesman, Commander George Devereux says he spoke to no one at the Trump campaign and had nothing to do with security at the event. Devereux assisted with security at the campaign's hotel with the Secret Service and learned of the cancellation from the director of security, the spokesman said.

At his Saturday rally, the front-runner also named other progressive groups in his tirade about the previous night's violence, including advocates from MoveOn.org.

"What they've done really on the other side -- it was MoveOn.org or other groups -- these are bad groups, bad groups. These are bad people. Let me tell you," Trump said. "These are people who really don't want to see our country be great again, let me tell you."

MoveOn.org, in turn, pointed their finger at the GOP front-runner, calling him a "fascist bully" and asserting that there was "only one person to blame."

"[H]is attempt to scapegoat progressive activists and MoveOn.org for violence at his canceled rally in Chicago is profoundly dishonest and untrue," Ilya Sheyman, executive director of MoveOn.org Political Action, said in a statement Saturday. "MoveOn proudly supported University of Illinois at Chicago students and local organizers in their courageous nonviolent protest outside the event. We helped student leaders by printing signs and recruiting MoveOn members to attend the student-led protest."

Later, a protester at Trump's rally rushed the stage and attempted to jump on to the platform.

"We want to get along with everybody, we can get along with people, we want to unify the people," Trump said later at his rally. "Our president has divided this country so badly, he has been a -- I call him the great divider."

Trump, for his part, has seemed to encourage physical reactions to demonstrators who crash his events.

At a rally in Iowa last month, Trump warned that, "There may be somebody with tomatoes in the audience."

"If you see somebody getting ready to throw a tomato, knock the crap out of them, would you?" he added. "Seriously. OK? Just knock the hell -- I promise you, I will pay for the legal fees."