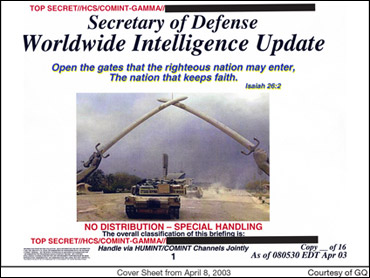 (GQ)
Critics often accused the Bush administration of waging a crusade against Iraq. Turns out those critics may have been correct, according to a profile of former Defense Secretary Donald Rumsfeld in GQ this month.

In what appears to be a callous effort by Rumsfeld to cater to President George W. Bush's religious fervor, the fiery Pentagon leader sent the president daily briefings on the war's progress headlined Worldwide Intelligence Update, which often included Bible passages on the cover paired with striking images.

In one report, a brilliant orange sun beams down on a U.S. tank in the desert beneath a passage from the Book of Ephesians reading, "Therefore put on the full armor of God, so that when the day of evil comes, you may be able to stand your ground, and after you have done everything, to stand."

The majority of the article, however, depicts a man fiercely territorial of his turf, employing a "my way or the highway" attitude. That was sometimes to the detriment of the U.S. military and the country, and included a week-long hesitation to release troops to Louisiana in order to keep order amid post-Hurricane Katrina chaos.

"No one," a former official told GQ, "threw sand in the gears like Rumsfeld."

Rumsfeld "was cynically playing the religious angle to seduce and manipulate a president who frequently quoted the Bible," said liberal commentator Frank Rich in the New York Times in response to the story. "But the secretary's actions were not just oily; he was also taking a risk with national security. If these official daily collages of Crusade-like messaging and war imagery had been leaked, they would have reinforced the Muslim world's apocalyptic fear that America was waging a religious war."

To read the full article by Robert Draper, click here.

And here are two more briefing covers, via GQ: 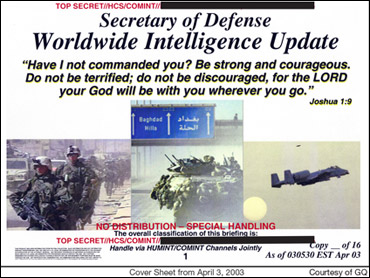 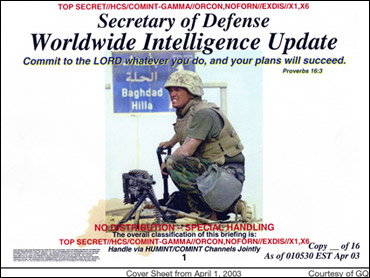