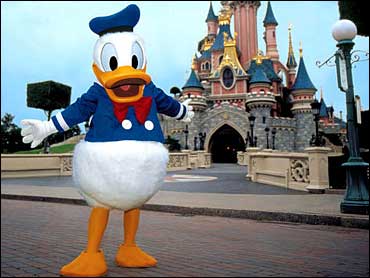 The cantankerous and often unlucky Disney legend feted his birthday at Disneyland Paris on Wednesday by dancing on stage under a shower of confetti as hundreds of park revelers sang "Happy Birthday To You."

A parade down the theme park's Main Street marked the occasion, with Mickey and Minnie Mouse leading the way. Daisy Duck and friends trailed behind carrying a giant pink cake bearing 70 candles.

Donald made his acting debut on June 9, 1934, in a Silly Symphony movie titled "The Wise Little Hen." Since then, the lovable yet fussy fowl has appeared in hundreds of films, from the educational "Donald Duck in Mathematics Land" to the 1942 cartoon "Donald Duck Drafted."

Donald, who wooed longtime love Daisy during much of his career, usually wears a sailor suit with — inexplicably — no pants. His middle name, revealed in the World War II draft cartoon, is Fountleroy.

His nephews Huey, Dewey and Louie went on to their own show biz career, starring alongside Donald's uncle Scrooge McDuck in the Disney series "DuckTales" that debuted in the late 1980s.

Clarence "Ducky" Nash was Donald's original voice. He was succeeded by Disney artist Tony Anselmo. Moving from the screen to the printed page, Donald debuted in a daily comic strip in 1938.

For the festivities in Paris on Wednesday, Karl Lagerfeld drew a portrait of the birthday duck sporting the fashion designer's signature glasses and cardigan. T-shirts with the image will be sold as collector's items.

"Oh-la-la, what energy — you're always so young!" yelled the master of ceremonies as the septuagenarian bird waved to the crowd, kissed Daisy and buoyantly danced away.