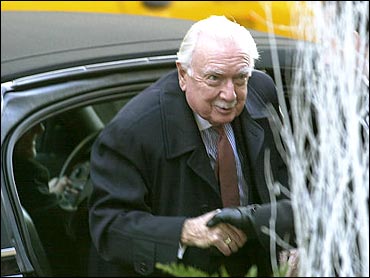 In a keynote address at Columbia University, Cronkite said today's journalists face greater challenges than those from his generation. No longer can journalists count on their employers to provide the necessary resources, he said, "to expose truths that powerful politicians and special interests often did not want exposed."

Instead, he said, "they face rounds and rounds of job cuts and cost cuts that require them to do ever more with ever less."

"In this information age and the very complicated world in which we live today, the need for high-quality reporting is greater than ever," he told journalism students and professionals at Columbia's Graduate School of Journalism. "It's not just the journalist's job at risk here. It's American democracy. It is freedom."

Cronkite said news accuracy has declined because of consolidations and closures that have left many American towns with only one newspaper. And as broadcasters cut budgets and air time for news, he said, "we're all left with a sound bite culture that turns political campaigns into political theater."

The former anchor urged owners of media companies — newspapers and broadcast alike — to recognize they have special civil responsibilities.

"Consolidation and cost-cutting may be good for the bottom line in the short term, but that isn't necessarily good for the country or the health of the news business in the long term," he said.

Michael Copps, a commissioner on the Federal Communications Commission, later said that looser broadcast regulations — such as those that had required stations to regularly prove they serve the community interest — have resulted in less local coverage, less diversity of opinion and fewer jobs for journalists over the past quarter century.

Without directly naming the United States' largest radio station operator, Clear Channel Communications Inc., Copps complained that many local musicians were being pushed aside when "media behemoths" distribute playlists from a central office.

The FCC is considering relaxing the rules even more. The agency decided in June to reopen the hotly disputed issue of ownership limits, which currently restrict the number of radio and television stations that one owner can have as well as cross-ownership between newspapers and broadcasters.

Many of the broadcast television networks and large media companies, such as the Tribune Co. and Gannett Co., have complained that current restrictions are outmoded in a digital age in which consumers also have the Internet and cable TV from which to choose.

Considering television alone, the nation saw the number of major networks grow from three to five, said Benjamin Compaine, author of "Who Owns the Media?: Competition and Concentration in the Mass Media." Add to that several 24-hour news channels on cable, he said.

But opponents of loosened rules worry that changes would hurt minorities' access to the airwaves, curtail children's and local programming and limit musical diversity.

"We have more outlets now, more in sheer numbers, engaged in news presentation than we've ever had," said Tom Rosenstiel, a former political reporter for the Los Angeles Times and now director of the Project for Excellence in Journalism. "The problem is most of them are not engaged in a lot of serious news gathering. They are largely engaged in repackaging material that other people have produced."

The Inflation Reduction Act may not lower inflation: analysis
Thanks for reading CBS NEWS.
Create your free account or log in
for more features.
View CBS News In
CBS News App Open
Chrome Safari Continue
Be the first to know
Get browser notifications for breaking news, live events, and exclusive reporting.