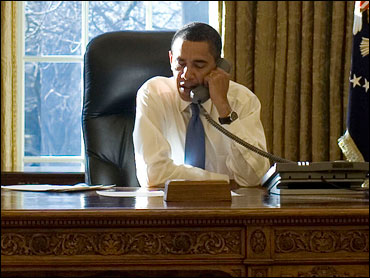 (Pete Souza)
Barack Obama promised change and on his first morning as president he delivered. He appeared at the Resolute Desk in the Oval Office in his shirt sleeves.

It was part of the story yesterday on the front page of the New York Times – meant to show that Mr. Obama has brought a shift in presidential style and habits to the White House.

His top aides didn't try to conceal the new president's less formal dress code. On the contrary, the White House released a photograph of it (above).

It's only worth noting because for the last eight years, Pres. Bush made it a standing order that he and his staff would always wear their suit jackets in the Oval Office.

"It's a huge honor to walk in the Oval Office," President Bush would often tell people. "It's hard for me to describe what an honor it is." Though even early in his presidency, he did not think the sanctity of the room would suffer if one of his dogs came into the room.

"Spot was born in the White House in 1989 when my dad and mother were up here, so she's quite comfortable with the surroundings," said Mr. Bush in 2002 when his new Scottish Terrier Barney was still a pup.

"They don't let Barney in. It's a new carpet and Barney's a new dog." But in later years, Barney was a frequent companion to Mr. Bush in the Oval Office.

He came to feel there was something magical about the Oval Office. At a Town Meeting in Dayton, Ohio in 2004, he told his audience about the effect the room had on people.

"People will stand outside the Oval Office and they say, 'I can't wait to get in there and tell him what for.' And then they open the door, and they walk in this majestic shrine to democracy, and they're overwhelmed by the atmosphere. And they say, 'Man, you're looking beautiful, Mr. President.'"

Other presidents have reported similar experiences about the disarming impact the room would have on visitors. And there's no reason to think it won't be the same during the Obama Presidency.

But in the eleven days he's been in office, other changes have been noted about the operations of the White House.

It's long-standing tradition that just before the Chief Executive enters a room for a speech, he is announced: "Ladies and Gentlemen – the President of the United States," is the standard introduction spoken by a staff member of the White House Communications Agency.

But this morning when Mr. Obama entered the East Room to address an audience about the economy, there was no announcement. He just walked right in – announcing his own presence with a hearty "Hello, everybody – good to see ya."

On Day One of his presidency, everywhere Mr. Obama went they played "Hail to the Chief" for him – but not since. In fact the U.S. Marine Band's duties at the White House over the last ten days appear to have been dramatically downsized.

Instead of the usual contingent of trumpets, tubas and drums, a single piano player now provides musical interludes before and after the president's appearance.

And the tunes have little connection to the military marching music of John Phillips Souza that is the usual accompaniment to presidential appearances. These days the pianist's repertoire includes Cole Porter's "Night and Day" and Sting's "Desert Rose."

"He's not a pomp and circumstance kind of guy," says Press Secretary Robert Gibbs of the new president.

And the changes in style are mild by comparison to the changes in policy he is beginning to implement. Just today he hailed the Senate's passage of legislation to expand S-Chip, the federal program that provides funding for health care to children. It's a measure vetoed not once but twice by Mr. Bush.