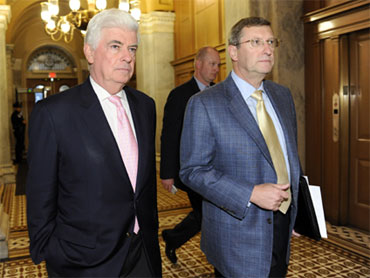 Despite their denials, influential Democratic Sens. Kent Conrad and Chris Dodd were told from the start they were getting VIP mortgage discounts from one of the nation's largest lenders, the official who handled their loans has told Congress in secret testimony.

Both senators have said that at the time the mortgages were being written they didn't know they were getting unique deals from Countrywide Financial Corp., the company that went on to lose billions of dollars on home loans to credit-strapped borrowers. Dodd still maintains he got no preferential treatment.

Robert Feinberg, who worked in Countrywide's VIP section, told congressional investigators last month that the two senators were made aware that "who you know is basically how you're coming in here."

"You don't say 'no' to the VIP," Feinberg told Republican investigators for the House Oversight and Government Reform Committee, according to a transcript obtained by The Associated Press.

The next day, Feinberg testified before the Senate Ethics Committee, an indication the panel is actively investigating two of the chamber's more powerful members:

- Dodd heads the Banking Committee and is a major player in two big areas: solving the housing foreclosure and financial crises and putting together an overhaul of the U.S. health care system. A five-term senator, he is in a tough fight for re-election in 2010, partly because of the controversy over his mortgages.

- Conrad chairs the Budget Committee. He, too, shares an important role in the health care debate, as well as on legislation to curb global warming.

Both senators were VIP borrowers in the program known as "friends of Angelo." Angelo Mozilo was chief executive of Countrywide, which played a big part in the foreclosure crisis triggered by defaults on subprime loans. The Calabasas, Calif.-based company was bought last July by Bank of America Corp. for about $2.5 billion.

Mozilo has been charged with civil fraud and illegal insider trading by the Securities and Exchange Commission. He denies any wrongdoing.

Asked by a House Oversight investigator if Conrad, the North Dakota senator, "was aware that he was getting preferential treatment?" Feinberg answered: "Yes, he was aware."

Referring to Dodd, the investigator asked:

"And do you know if during the course of your communications" with the senator or his wife "that you ever had an opportunity to share with them if they were getting special VIP treatment?"

Bryan DeAngelis, Dodd's spokesman, said Feinberg has repeatedly made allegations of special treatment that were not true.

"As the Dodds have said from the beginning, they did not seek or expect any special rates or terms on their loans and they never received any. They were never offered special or sweetheart deals and if anyone had made such an offer, they would have severed that relationship immediately."

DeAngelis also repeated Dodd's statements from last February that an independent report showed the terms received by the senator and his wife were widely available at the time.

Conrad's spokesman, Chris Gaddie, said Monday that the senator "never asked for, expected or was aware of loans on any preferential terms" and has "worked overtime to set the record straight."

The ethics committee determines whether senators violated standards of conduct. The outcome of the investigation could hinge on whether the mortgage violated strict limits on gifts to lawmakers or ran afoul of other Senate rules. The committee typically just issues a report. It could recommend a censure vote by the Senate, but that is rare.

Feinberg could face criminal prosecution if shown to have made false statements. He was questioned closely by three of the ethics committee's six senators: Democratic Chairman Barbara Boxer of California; the panel's senior Republican, Johnny Isakson of Georgia, and Republican Jim Risch of Idaho, according to Elana Goldstein, one of Feinberg's attorneys who accompanied him to both closed-door committee appearances.

The ethics questioning was intense at times, and Boxer asked the bulk of the questions. When Feinberg described a conversation he had with Dodd, she demanded to know how he remembered it. Feinberg said he recalled Dodd saying he had to leave to make a speech.

Boxer asked whether Dodd and Conrad received VIP treatment because they were senators. Feinberg said that was not the case; they received breaks as other influential people in Countrywide's "friends of Angelo" VIP program.

Countrywide VIPs, Feinberg told the committees, received discounts on rates, fees and points. Dodd received a break when Countrywide counted both his Connecticut and Washington homes as primary owner-occupied residences - a fiction, according to Feinberg. Conrad received a type of commercial loan that he was told Countrywide didn't offer.

"The simple fact that Angelo Mozilo and other high-ranking executives at Countrywide were personally making sure Mr. Feinberg handled their loans right, is proof in itself that the senators knew they were getting sweetheart deals," said Feinberg's principal attorney, Anthony Salerno.

Two internal Countrywide documents in Dodd's case and one in Conrad's appear to contradict their statements about what they knew about their VIP loans.

At his Feb. 2 news conference, Dodd said he knew he was in a VIP program but insisted he was told by Countrywide, "It was nothing more than enhanced customer service ... being able to get a person on the phone instead of an automated operator."

He insisted he didn't receive special treatment. However, the assertion was at odds with two Countrywide documents entitled "Loan Policy Analysis" that Dodd allowed reporters to review the same day.

The documents had separate columns: one showing points "actl chrgd" Dodd - zero; and a second column showing "policy" was to charge .250 points on one loan and .375 points on the other. Another heading on the documents said "reasons for override." A notation under that heading identified a Countrywide section that approved the policy change for Dodd.

Mortgage points, sometimes called loan origination fees, are upfront fees based on a percentage of the loan. Each point is equal to 1 percent of the loan. The higher the points the lower the interest rate.

Dodd said he obtained the Countrywide documents in 2008, to learn details of his mortgages.

In Conrad's case, an e-mail from Feinberg to Mozilo indicates Feinberg informed Conrad that Countrywide had a residential loan limit of a four-unit building. Conrad sought to finance an eight-unit apartment building in Bismarck that he had bought from his brothers.

"I did advise him I would check with you first since our maximum is 4 units," Feinberg said in an April 23, 2004, internal e-mail to Mozilo.

Mozilo responded the same day that Feinberg should speak to another Countrywide executive and "see if he can make an exception due to the fact that the borrower is a senator."

Feinberg said in his deposition with House Oversight investigators last month that exceptions for the type of loan Conrad received were not allowed for borrowers outside the VIP system.

"If there was a regular customer calling, and of course you say, 'No, we're a residential lender. We cannot provide you with that service,"' Feinberg said.

"He was allowed to do both of those as owner-occupied, which is not allowed. You can only have one owner-occupied property. You can't live in two properties at the same time," he said.

Normally, Feinberg said, a second home could require more equity and could have a higher mortgage rate.

Rep. Darrell Issa of California, the senior Republican on the House Oversight Committee, had his investigators question Feinberg as part of a broader investigation into Countrywide's VIP program.

Other names that have surfaced as "friends" of Mozilo include James Johnson, a former head of Fannie Mae who later stepped down as an adviser to Barack Obama's presidential campaign, and Franklin Raines, who also headed Fannie Mae. Still other "friends" included retired athletes, a judge, a congressional aide and a newspaper executive.

Conrad initially said in June 2008, "If they did me a favor, they did it without my knowledge and without my requesting it."

The next day, Conrad changed course after reviewing documents showing he got special treatment, and said he was donating $10,500 to charity and refinancing the loan on the apartment building with another lender. He also said then it appeared Countrywide had waived 1 point at closing on the beach house.

Gaddie said Feinberg has previously made statements to the news media that Countrywide waived 1 point without the senator's knowledge.

Feinberg testified that VIPs usually were not told exactly how many points were being waived, but it was made clear to them that they were getting discounts.