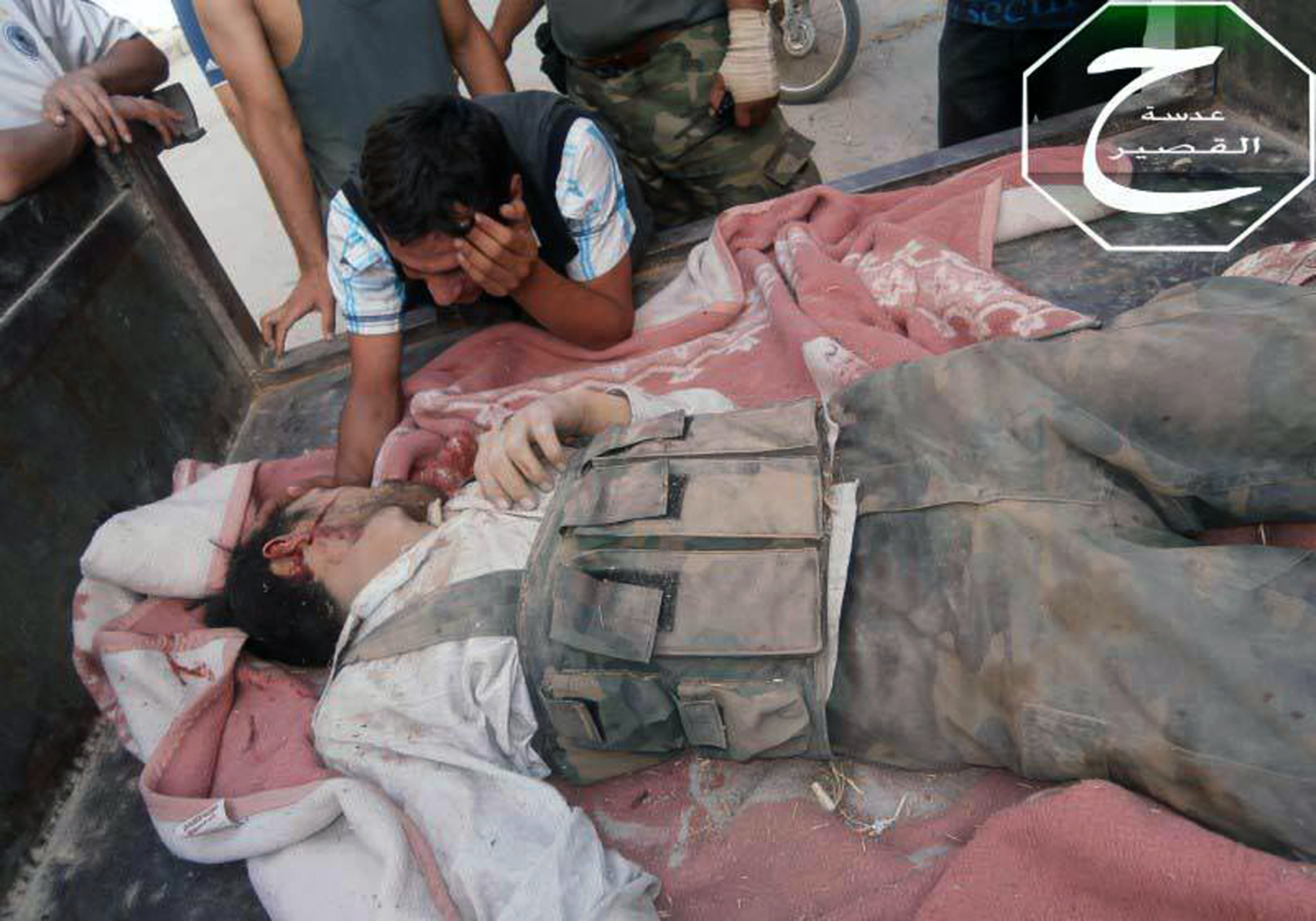 Beirut At least 300 seriously wounded residents of an embattled Syrian town near the border with Lebanon need to be evacuated for medical treatment, a doctor told The Associated Press on Monday, as fighting in Qusair raged for the third straight week.

Kasem Alzein, who coordinates treatment in several makeshift hospitals in Qusair, said the wounded are being treated in private homes after the town's main hospital was destroyed during fighting between the Syrian army — backed by Lebanese Hezbollah guerrillas — and rebels fighting to topple President Bashar Assad's regime.

Speaking to the AP from Qusair via Skype, Alzein pleaded for help, saying evacuation efforts by local medical teams had failed after a convoy was attacked last week and 13 of the wounded were killed. He said medical supplies are running out and doctors treating the wounded most urgently need oxygen to keep the 300 people — mostly women, children and elderly — alive.

"The humanitarian and medical conditions are terrible," Alzein said, adding that no medical supplies have reached the town since the government has launched an offensive on Qusair May 19. "We are treating people in homes in an unsterilized environment. We tried to evacuate the wounded and we can't. No one is helping us."

Alzein said 50 abandoned homes around Qusair have been turned into makeshift hospitals. Four of the homes have been converted into operating theatres. Elzein said the doctors had stocked up on medical supplies, but they are running out of antibiotics, bandages and anesthetics, he said, adding that oxygen supplies are already exhausted.

Appeals by the United Nations and other aid organizations to allow humanitarian workers to enter Qusair have gone unheeded by authorites in Damascus as fighting drags on and neither side has been able to deliver a decisive blow. Syrian regime troops and fighters from Hezbollah have gained ground, but rebels have been able to defend some positions and appear to be dug in the north and west of the town.

On Sunday, U.N. chief Ban Ki-moon called Syrian Foreign Minister Walid al-Moallem to express concern over the situation in Qusair, according to Syria's state-run news agency SANA. However, al-Moallem told the U.N. chief that the Red Cross and other aid agencies will only be able to enter Qusair "after the end of military operations there," SANA said.

Also on Monday, Hezbollah guerrillas fought Lebanese Sunni militants trying to reach Qusair to join the Syrian rebels. Residents said clashes were taking place in the Syrian village of Jousih, about 13 kilometers (eight miles) from Qusair. There were no immediate reports on casualties.

Over the weekend, three rockets from Syria struck Lebanon's northeast and 18 rockets and mortar rounds hit its eastern Baalbek region, a Hezbollah stronghold.

From Saturday night into Sunday, Hezbollah fighters inside Lebanon ambushed Syrian rebels and allied Lebanese fighters whom they suspected of rocketing Baalbek, a Lebanese security official said. The clashes were the worst yet inside Lebanon, where the Syrian conflict has intensified since Hezbollah's involvement in Qusair fighting has been public recent weeks.

A Hezbollah fighter and several rebels were killed in Monday's clashes, which happened in a remote area near the Syrian border, said the official, who spoke on condition of anonymity in line with regulations.

Elsewhere in Lebanon, gunmen fired on a prominent pro-Hezbollah Sunni cleric in the port city of Sidon on Monday but failed to hit him, security officials said. The attack on Sheik Maher Hammoud increased fears that the Syrian conflict could re-ignite the country's explosive sectarian mix that mirrors the one in Syria. Lebanon's 15-year civil war ended in 1990.

Hammoud was fired on by assailants in a moving vehicle as he walked from his home to the al-Quds Mosque where he preaches, the officials said. His bodyguards returned fire but no one on either side was hurt, they said, speaking on condition of anonymity in line with regulations.

Hammoud is a longtime supporter of Hezbollah, whose power base lies in Lebanon's Shiite Muslim community and which is supported by Iran. The group's role in Syria's civil war has become more apparent in recent weeks as the group buried dozens of fighters who have been in an ongoing battle for Qusair.

They fight on behalf of President Bashar Assad's regime, dominated by his Alawite sect that is an offshoot of Shiite Islam.

Sidon is a majority Sunni Muslim city, and many Lebanese Sunnis back Syria's Sunni-dominated rebels. It was not clear who was behind the shooting. Hammoud told Lebanon's private Al-Mayadeen TV that he assumed it was linked to his support for "Hezbollah's jihad" in Syria.

Rival sectarian factions have frequently clashed inside Lebanon during the 2-year-old Syrian conflict.

In the north, fighting between Sunnis and Alawites in the city of Tripoli raged overnight into the early hours of Monday, with security officials saying 4 people had been killed and 29 wounded since Sunday. The four who died Monday were wounded a day earlier, they added. They officials spoke on condition of anonymity in line with regulations.

By daytime, fighting had largely subsided although snipers were still active in the most affected neighborhoods, Lebanon's official news service said. The army was patrolling the city, and universities, schools and business had opened, it added.