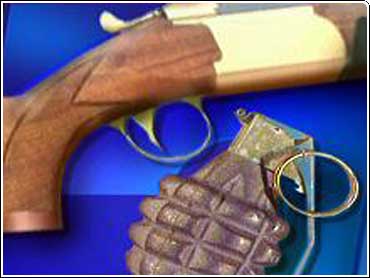 A doctor who had been sanctioned by Arkansas' medical board was arrested after federal agents found grenades, grenade launchers and more than $1 million worth of machine guns in and around his home. But authorities said Friday the arrest is not tied to a recent bombing that critically wounded the board's chairman.

Dr. Randeep Mann, an internal medicine specialist from London, Ark., was arrested by federal agents Wednesday. He appeared Thursday before a federal magistrate on a charge of possession of an unregistered firearm and was scheduled for a bond hearing Monday.

In an affidavit, David Oliver, an agent with the Bureau of Alcohol, Tobacco, Firearms and Explosives, says ATF agents and state police officers interviewed Mann on Feb. 4, the day a bomb exploded in the West Memphis driveway of Dr. Trent Pierce. Pierce remains in critical condition in a Memphis, Tenn., hospital.

In the affidavit, Oliver says agents searched Mann's home Wednesday in London, 175 miles west of West Memphis, after city workers found a canister of 98 grenades - the kind used in grenade launchers - buried in a field near the home and notified the Pope County sheriff's office.

Agents found five more canisters in a shop attached to Mann's garage, two grenade launchers in a safe in his basement, and 110 fully automatic machine guns valued at more than $1 million located throughout his home. It could not be determined whether 17 of the machine guns were legally registered to Mann, the affidavit states.

Drake Mann, a Little Rock attorney who represents the doctor, said he has spoken with his client but that they are still looking into the allegations.

"I don't think the government knows what its intentions are," said the attorney, who is not related to the doctor.

The state board restricted Randeep Mann's prescription-writing privileges in July 2006 after several of his patients died from a lethal mix of drugs or overdose of prescription medicine. The doctor said the issue was not the prescriptions but the patients' abuse of the drugs. He and the board reached an agreement by which he was allowed to keep his medical license but was barred from prescribing narcotics.

Three years earlier, the board had suspended Mann from prescribing controlled substances for one year.