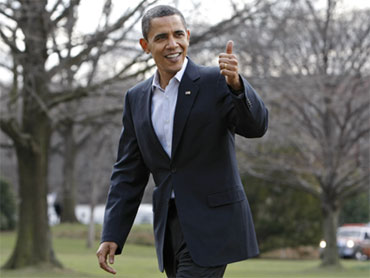 President Obama is in "excellent health" and "fit for duty," the White House physician said Sunday after the 48-year-old commander in chief's first checkup since he took office.

Navy Capt. Jeffrey Kuhlman said after the 90-minute exam at the National Naval Medical Center in Bethesda, Maryland, that he saw nothing that would prevent Obama from fulfilling his term as president.

According to a White House release after the exam, Kuhlman recommended that Obama "continue smoking cessation efforts" and modify his exercise regimen to strengthen his leg muscles to overcome occasional pain from chronic tendinitis in his left leg.

The report said Obama uses a nonsteroidal anti-inflammatory for the tendinitis and "nicotine replacement therapy" - believed to be nicotine gum - in his bid to quit smoking. Obama said at a June news conference that he still had an occasional cigarette. It was his first public acknowledgment that he hadn't kicked the habit.

White House officials were not immediately available for comment about whether the president was relying solely on nicotine gum or still occasionally smokes cigarettes.

The doctor said the president should modify his diet to bring his LDL, or bad cholesterol, below 130. At the time of his last exam, in January 2007, when he was an Illinois senator, Obama's total cholesterol was 173, while his LDL was 96 and HDL, or good cholesterol, was 68. That was an excellent report.

This time total cholesterol was up to 209, with HDL down slightly at 62. LDL was up to 138. Borderline high cholesterol starts at 200, with LDL considered in the same category at 130.

The overall results, the doctor said, indicated the president need not return for a physical until August 2011 - after he turns 50.

The president is the picture of health, eats modest portions and exercises regularly. He is an avid basketball player and golfer.

The report said Obama, at 6-feet,1-inch, weighs 180 pounds in shoes and exercise clothing. His pulse rate is 56, which is very good, as is his blood pressure - 105 over 62. The doctor said Obama's vision was 20/20 in both eyes for both distance and near vision.

The president was checked for and found free of colon cancer with a virtual colonoscopy, a scan that avoids the more invasive visual inspection with a camera device that is passed into the large intestine.

The tendinitis that Obama suffers in his left leg could be the result of his regular basketball playing. He is left-handed and he would use his left leg primarily in taking jump-shots.