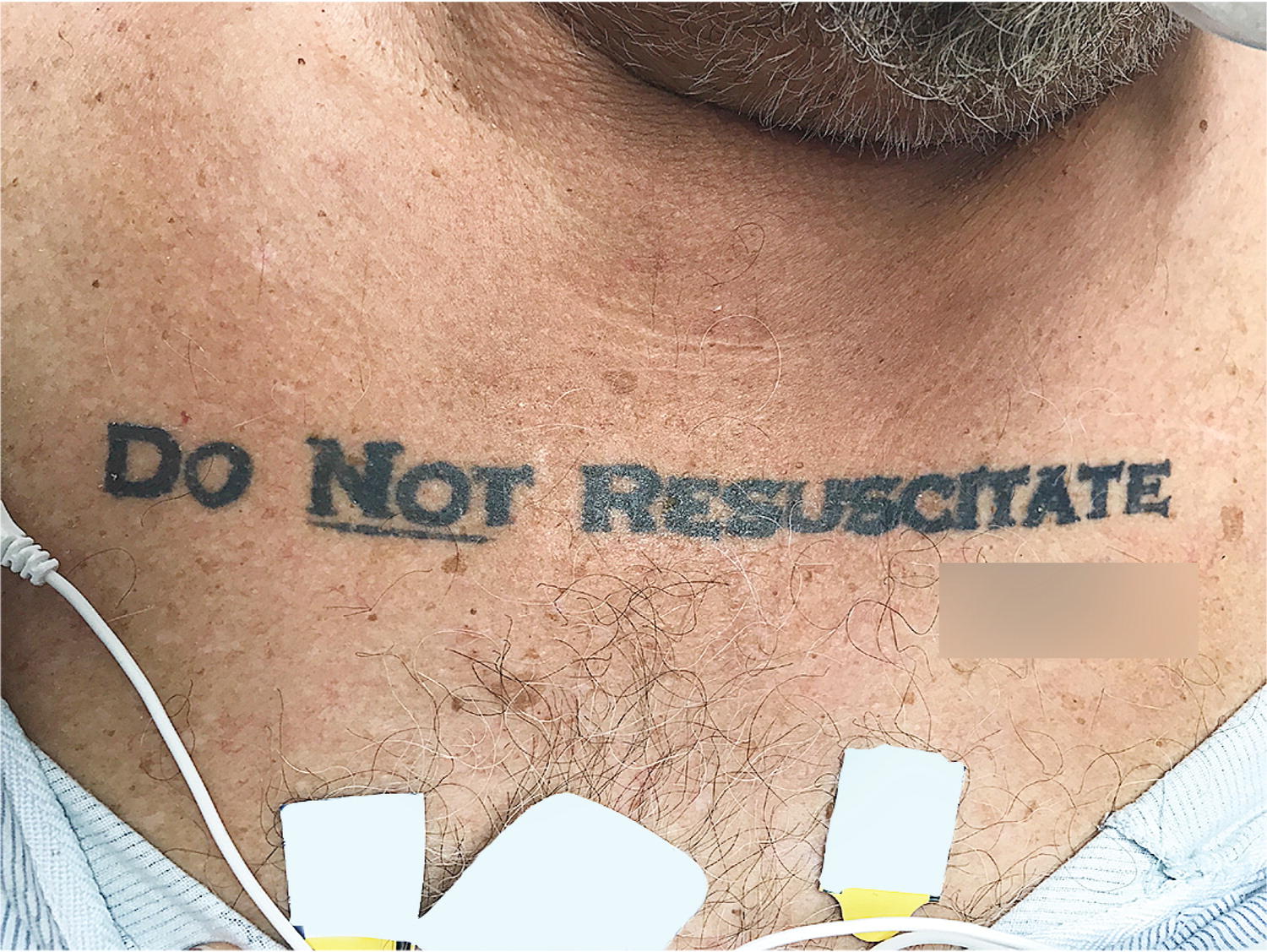 Doctors at a Florida hospital faced an ethical dilemma when an unconscious man arrived in the emergency room with a tattoo that read "Do Not Resuscitate" emblazoned on his chest.

The patient, who was 70 years old, had an elevated blood alcohol level and had a history of chronic obstructive pulmonary disease (COPD), diabetes and atrial fibrillation. A few hours later, his blood pressure dropped to an abnormally low level.

The man had arrived with no identification and no family or friends.

His tattoo, which included a signature and had the word "Not" underlined, left doctors unsure of what to do next.

Was the tattoo a clear representation of the patient's wishes? Should they honor it and avoid any heroic efforts to save his life? Were they required to, legally?

Doctors detailed the case and the decisions they made in a report published in the New England Journal of Medicine.

At first, they decided not to honor the tattoo, "invoking the principle of not choosing an irreversible path when faced with uncertainty," they wrote.

However, this decision left the medical team conflicted, and they brought in an ethics committee to consult on it further.

After reviewing the case, the committee advised the doctors to honor the DNR tattoo.

"They suggested that it was most reasonable to infer that the tattoo expressed an authentic preference," the doctors wrote.

At the same time, the hospital's social work department had managed to obtain a copy of the patient's Florida Department of Health "out-of-hospital" DNR order, and the medical team confirmed that it was consistent with the message of his tattoo.

The man's condition deteriorated and he died without any further medical intervention.

The doctors write that they were "relieved" to find the patient's official written DNR request in the state files, as the "tattoo produced more confusion than clarity." They cited one other case, found in a review of the scientific literature, involving a person with a DNR tattoo — but that patient's tattoo no longer reflected his current wishes.

They also mentioned being concerned about the potential unknown circumstances in which a person might get such a tattoo. What if the patient had done it while under the influence of drugs or alcohol?

"There's no law that says you have to respect or recognize a tattoo," Caplan told CBS News. "But morally, it carries a lot of weight."

Caplan, the founding head of the Division of Medical Ethics at NYU School of Medicine, was not involved in the patient's case.

He said the first step for doctors treating such a patient would be to contact next of kin or seek a written DNR order.

"If that's not available and there are no family or friends around to verify the patients' wishes, would I not resuscitate him just on the basis of the tattoo? Probably not, because I wouldn't know if I could trust it," he said. "I wouldn't know whether it was 10 years old or five minutes old. I wouldn't know if maybe he had changed his mind. There's too much uncertainty."

Caplan advises that if people want to have a DNR tattoo or bracelet to call attention to their end-of-life medical wishes, they should also carry a copy of a living will or advanced directive in their wallet.