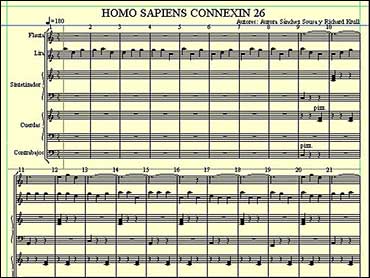 Imagine the human genome as music. Unravel DNA's double helix, picture its components lined up like piano keys and assign a note to each. Run your finger along the keys.

Spanish scientists did that just for fun and recorded what they call an audio version of the blueprint for life.

The team at Madrid's Ramon y Cajal Hospital was intrigued by music's lure - how it can make toddlers dance and adults cry - and looked for hints in the genetic material that makes us what we are. They also had some microbial genes wax melodic.

The end product is "Genoma Music," a 10-tune CD due out in February. "It's a way to bring science and music closer together," said Dr. Aurora Sanchez Sousa, a piano-playing microbiologist who specializes in fungi.

DNA, or deoxyribonucleic acid, is composed of long strings of molecules called nucleotides, which are distinguished by which of four nitrogen-containing bases they contain: adenine, guanine, thymine or cytosine, represented as A, G, T and C. These became the musical notes.

French-born composer Richard Krull turned DNA sequences - a snippet of a gene might look like AGCGTATACGAGT - into sheet music. He arbitrarily assigned tones of the eight-note, do-re-mi scale to each letter. Thymine became re, for instance. Guanine is so, adenine la and cytosine do.

Played solo on percussion, classical guitar or the other instruments used on the CD, the sequences would sound cute but rudimentary, the musical equivalent of PacMan in an era of Microsoft Xbox.

So the alphabet soup of bases served as just that, base lines to accompany melodies composed by Krull and his scientific colleague. They say the melodies were influenced, even dictated, by the mood and rhythm of the underlying genetic code.

In general, the genome music is an easy-listening sound that is vaguely New Age. One of the prettiest songs is based on Connexin 26, a human gene that causes deafness when it mutates. The DNA skeleton is expressed with tinkling bells and a flute melody does the rest.

Another song draws on a yeast gene known as SLT2. Sanchez Sousa, the main author of the project, is fond of the sequence because it features a stretch in which one triplet of nitrogen bases appears several times in rapid succession - a repetitive phenomenon that has a musical equivalent called obstinato.

"This is a very sad part, but a beautiful one," Sanchez Sousa said, wearing a white lab coat and waving her arms like a musical conductor as she played the segment for a visitor.

She declined to discuss marketing plans for the CD. She said she's circulated it only among academics so far, and psychologists in particular find it relaxing.

Her team's plans for future music include having the hospital choir sing a vocal piece based on DNA from a bacteria.

Seeking music in nature goes way back. In the 6th century B.C., the Greek philosopher and mathematician Pythagoras argued that celestial bodies in rotation gave off pitched sounds that blended into a beautiful harmony he called "the music of the spheres."

The idea is that matter and its behavior- wheat fields shimmering and tongues of fire dancing - may hold something intrinsic that can be transformed into music, said Dr. Fernando Baquero, head of microbiology at Ramon y Cajal Hospital.

Maybe that's why people like music: It's already inside them anyway, so hearing it touches a piece of them, Baquero said.

When we like something, it is because we recognize it," he said. "It's funny, but to like is to recognize."