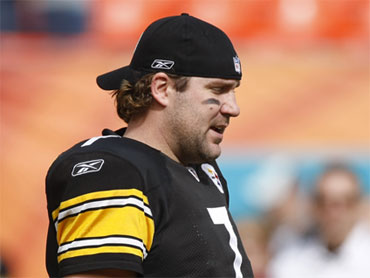 A 20-year-old college student claims the two-time Super Bowl winner assaulted her Friday in the bathroom of a nightclub in Milledgeville, Ga., south of Atlanta. He was celebrating his 28th birthday, reportsCBS News Correspondent Mark Strassmann.

Police questioned the quarterback Friday and released him without filing charges, but say the want to interview him again.

Last year, another woman claimed Roethlisberger raped her in his Lake Tahoe hotel room. He denied it and criminal charges were never filed.

Milledgeville police add they're studying security videos from the club, and will likely ask Roethlisberger for a DNA sample.

It's that likelihood that Bloom zeroed in on, telling "Early Show" co-anchor Harry Smith, "What really jumps out at me is the DNA tests that the police are now talking about. Because there's only two defenses to rape: 'I didn't have sex with her' or 'I did have sex with her, but it was consensual.' This woman did everything right. She went to the police immediately. She went to the hospital immediately. Presumably, they took any physical evidence like DNA from her body that might be there. So, if there is DNA that links him to her, the question is, is he going to deny having any sexual contact with her or is he going to claim that it was consensual -- in a night club.

" … Juries love forensic evidence. They want forensic evidence, when it is a case like this that (could come down to) he said/she said. So, the question is if there is DNA linking him to her, what part of her body is it on, are there tears, lacerations, bruises, things of that nature that would also tend to corroborate a sexual assault? That's what I think police are most concerned about."

Asked whether the older sex assault allegations against Roethlisberger could bear any weight with regard to the new accuser's credibility, former prosecutor John Q. Kelly told Smith, "At a minimum it just shows he's exercising poor judgment, especially Ben Roethlisberger -- he's rich, famous, single, the cornerstone of a franchise that we all know about. But he's got to make better choices. It can be done. Derrick Jeter, LeBron James, people like that are careful with the people they run with and the choices they make. He's got to do that."

But could it be that Roethlisberger is being targeted here?

"Well, sure. You've got a lot of different things that can happen in these situations. First of all, look no further than (false rape allegations against the) Duke lacrosse team, what happened to them. So, you can't jump to conclusions. But you might have a woman who overreacted, she might have been rejected by Roethlisberger and she's getting even. Attention seeking. Consensual activity that she was embarrassed about afterwards. Or maybe she's looking for a payday. We've seen them all play out in the past."

What would he be telling Roethlisberger?