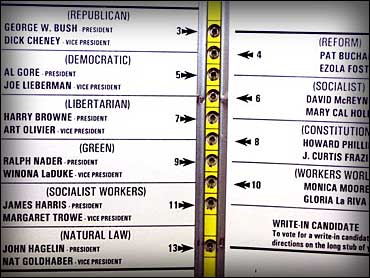 The ballots from Florida's disputed 2000 presidential election will be kept in the state archives for their historical value.

Secretary of State Glenda Hood sent a letter this week to election supervisors directing them not to destroy the ballots, which will be transferred to Tallahassee this summer.

Supervisors normally would have destroyed the ballots by now because they take up so much space. But Florida's Department of State, which oversees elections, extended the normal 22-month preservation deadline until July 1 to give lawmakers time to decide what to do about the famous ballots.

The Legislature, however, never took up the issue. Hood said in the letter that she made the decision after consulting with archives staff and others. She couldn't be reached for comment Wednesday.

The ballots were at the heart of the cliffhanger election and the ensuing five-week legal fight between George W. Bush and Al Gore. Mr. Bush eventually won Florida, and thus the White House, by 537 votes, after a crucial decision by the U.S. Supreme Court.

The space the ballots occupy is significant. In Palm Beach County alone they take up six or seven 6-foot-high pallets.

Department of State spokeswoman Jenny Nash said the ballots would go into the building that houses the state archives.

Attorney Gary M. Farmer Jr., who has sued to prevent destruction of the ballots in some counties, said the documents should be preserved in part because they might play a role in future election reforms. Some election officials said they doubted they would be of any further use.

Tallahassee lawyer Barry Richard, who represented George W. Bush through most of the recount case, said the famous ballots probably have decades of anonymity ahead.

"Seventy years, 100 years from now, somebody will say, 'What are these boxes for?'" Richard said. "And nobody will probably look at them between now and then. They're not much to look at."