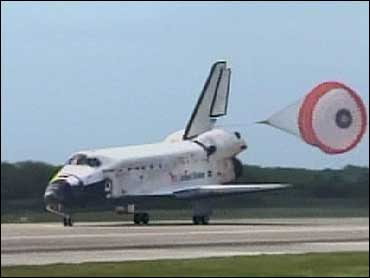 Shuttle Discovery and its crew of seven returned to Earth on Saturday and successfully wrapped up a construction mission that left the international space station with all its solar wings and extra electrical power.

Discovery swooped through a cloudy sky and landed at NASA's spaceport in midafternoon, a little later than initially planned, touching down at 3:13 p.m. ET.

"It's good to be back home," said Discovery's commander, Lee Archambault.

Mission Control delayed Discovery's homecoming by about 90 minutes because of windy, cloudy weather. But the wind shifted and conditions improved enough for the second and final landing opportunity of the day.

Discovery's 13-day flight - which ended just as a new Russian-launched crew was settling into the space station - was highlighted by the installation and unfurling of the space station's last pair of solar wings. The $300 million addition brought the orbiting outpost up to full power, a vital part of NASA's plan to double the space station population and boost the amount of science research in a few months.

The shuttle mission spanned more than 5 million miles and 202 orbits.

CBS News space analyst Bill Harwood reports that Magnus was making the trip home resting on her back in a reclining chair on Discovery's lower deck to ease her transition back to gravity after four months in space.

The shuttle also ferried five months' worth of science samples from the space station, mostly blood, urine and saliva collected by its crew members. As many vials as possible were stuffed into the shuttle freezer, with the rest put in ice packs.

Also coming back for NASA scientists: four to five liters of recycled water that had been the astronauts' own urine and sweat. The water was produced after Discovery delivered a new urine processor that fixed the recycling machine.

NASA hopes to have the water samples tested within a month. If the toxicology results are good, the three space station residents will be given the all-clear to start drinking the recycled water.

Discovery's astronauts performed three spacewalks to hook up the solar wings and perform other chores. They were unable to deploy a pair of equipment storage platforms, after one of the shelves jammed.

NASA has until late this year to set up the shelves. That's when the items that will be placed there - crucial spare parts for the space station - are launched.

NASA conducted a heat shield test during Discovery's re-entry, as the shuttle crossed the Gulf of Mexico on its way to Florida.

A new type of tile with a slight bump was attached beneath Discovery's left wing to disrupt the hypersonic air flow. Engineers wanted to measure the extra heat generated on downstream tiles and insisted it would not be excessive and that the experiment was safe.

The space agency designed the new tile as a potential improvement for the shuttles - a matter of keen interest ever since Columbia was destroyed during re-entry in 2003 - and the new rocketships that will replace them. 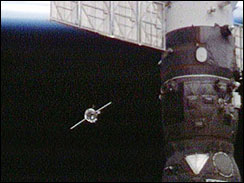 (NASA TV)
While Discovery prepared for landing, a Soyuz TMA-14 spacecraft (left) carrying a Russian cosmonaut, an American astronaut and a U.S. billionaire tourist docked at the international space station.

Russian cosmonaut Gennady Padalka, who will take over command of the station from outgoing skipper Mike Fincke, manually guided the capsule to a stop ahead of schedule Saturday two days after blasting off from the Baikonur cosmodrome in Kazakhstan.

Also aboard the Soyuz: Michael Barratt, a NASA physician-astronaut, and Charles Simonyi, a software developer making his second paid visit to the station.

The crews of the capsule and the station will spend around three hours checking seals before opening the air locks and meeting up face-to-face.

Search giant want to integrate internet-enabled products for the home with security technology.

Thirteen players and staffers on the Cardinals have tested positive for the coronavirus.

The president continues to to tout his administration's successes as deaths and cases climb.