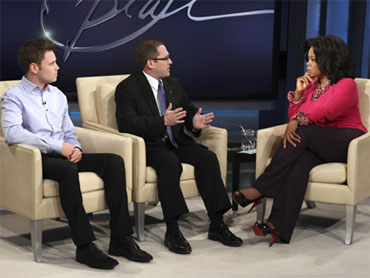 Two employees of Discovery Communications described to Oprah Winfrey for her show on Thursday how they were taken hostage after walking into the company's headquarters near Washington and finding a gunman who had them lie on the marble floor.

Jim McNulty said he was confused at first when he walked into the lobby and saw "a man holding a gun to the guard behind the desk."

"I start thinking, 'Are we doing a production here? Why would somebody be showing a gun?' until the man pointed at me, 'On the ground. On the ground,"' said McNulty, a senior writer and producer for the Discovery-owned cable station TLC.

On Sept. 1, James Jae Lee stormed into the Silver Spring, Md., building and took three people hostage in the lobby. As the hostages were about to make a break for it, officers shot Lee dead. The hostages included McNulty, Chris Wood and a security guard. Police said 43-year-old Lee had been armed with starter pistols and homemade pipe bombs.

"As I'm face down [on the marble floor] you can hear him putting basically his bomb device together that he was wearing," McNulty said.

A short time later, Wood was coming back to work from lunch when he walked into the lobby and saw McNulty lying on the floor.

"The gunman was wielding the gun at me and saying, 'Get on the floor,"' Wood, a TLC marketing specialist, told Winfrey.

None of the 1,900 people who work in the building were hurt, and most made it out before the standoff ended. Meanwhile, McNulty and the others remained in the lobby.

"I just start praying Hail Mary after Hail Mary," McNulty said. "I lost track of how many I said."

Then, McNulty said, then a calm came over him and "I started thinking, OK I'm a hostage what do I need to do?"

Wood's cell phone kept going off and he tried to answer it, "so that anybody on the other end could hear where I was." At one point, he was able to look at his e-mail and saw a message from his boss.

"I responded and I said 'I'm hostage with Jim McNulty and the guard in the lobby.' I sent that off," Wood said.

After the hostage situation, a lengthy posting on a website registered to Lee said Discovery and its affiliates should stop "encouraging the birth of any more parasitic human infants." On his site and in court papers, he demanded an end to shows such as TLC's "Kate Plus 8" and "19 Kids and Counting."

When it was time to escape, Wood told Winfrey he mouthed to a guard, saying "run." Wood said the guard then "shook his head yes."

Wood said he got McNulty's attention "and I said run."

When McNulty and Wood took off, "I just turned and ran the fastest I think I've ever run," Wood said.

McNulty took cover behind a pillar when he said "a voice in my head just said run" and he ran outside.

Father of Parkland victim speaks out about Texas shooting
Thanks for reading CBS NEWS.
Create your free account or log in
for more features.
View CBS News In
CBS News App Open
Chrome Safari Continue
Be the first to know
Get browser notifications for breaking news, live events, and exclusive reporting.