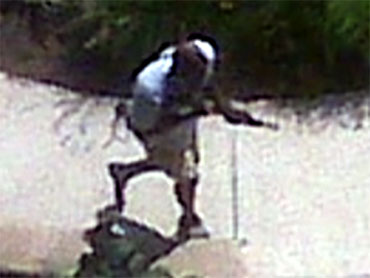 A man upset with the Discovery Channel's environmental programming who took three people hostage at gunpoint at the company's headquarters Wednesday has been shot and killed by police, officials said.

CBS News reports that the gunman has died, according to a law enforcement source. A source at the Discovery Channel building told CBS News that SWAT personnel fired the shots that killed the suspect.

The gunman was identified as 43-year-old James Lee, CBS News Correspondent Wyatt Andrews reports. For several hours Lee held his hostages while police tried to learn in telephone negotiations what he really wanted. But police also had a camera on Lee, and when he drew a handgun, they moved in.

"This is a scary event; it really is," Discovery spokesman David Levy told reporters after the hostages escaped.

Lee was a man with a long and quirky history of protests against the Discovery network, Andrews reports. In an anti-corporate protest two years ago, Lee was arrested while throwing cash outside Discovery's offices. He said in court he had been moved to save the planet partly by former Vice President Al Gore's documentary "An Inconvenient Truth."

But Lee's website, SaveThePlanet.com, became a hodgepodge of anti-immigration, anti-war and anti-population rants, where he rails against "giving birth to more filthy human children." He seemed especially upset by Discovery Health's broadcast called "Baby Stories," which celebrates the joys of pregnancy and childbirth.

"He went down, and the device went off," Manger said.

Because at least one explosive device went off during the rescue, technicians will search the entire building for any remaining explosives before letting any workers return, Andrews reports.

Lee burst into the suburban Washington building about 1 p.m. waving a handgun and with canisters strapped to his body. The metallic canisters on the suspect's front and back appeared to explosives, though police did not confirm whether or not they are real.

"We're going on the assumption that they could be explosive devices," Manger told reporters earlier. "That's the only way we can proceed."

Adam Dolan, a sales director in Discovery's education division, told The Associated Press by phone that the company has unarmed security guards who won't let anyone into the building without a badge.

Police were talking to the suspect since about 2:20 p.m. ET.

Manger said that there are no reports of injuries from the building's 1,900 employees.

The initial report was of a suspicious package that was possibly explosive, said Montgomery County fire spokesman Capt. Oscar Garcia, who also said no one had been injured.

Witnesses have reported that the man has fired multiple shots, though police have not confirmed those details.

Montgomery County police, SWAT teams, and explosives experts were on the scene and set up a perimeter of roughly 200 yards around the building. The FBI and ATF were also on the scene.

A website registered to Lee criticized Discovery and announced plans for the protest in January 2008: "These guys have been very sneaky and deceptive as to their contribution to the planetary problems. Just look at their 'new' show about saving the planet, 'Planet Green,' to me, it's just another show about more PRODUCTS to make MONEY, not about actual solutions. We can't let them get away with doing it anymore."

According to a story in The Gazette, which covers Montgomery County, Lee was arrested after throwing thousands of dollars in the air outside Discovery's building.

After his 2008 arrest, Lee said he planned the protest because Discovery's programming had little to do with saving the planet. He was identified then as being from San Diego, Calif., although he gave a local address of a homeless shelter.

Police reports indicate he paid homeless people to join his protest and carry signs outside the building. He gave one individual $1,000 for what he considered a prize winning essay.

At one point, a crowd of more than 100 people gathered around Lee, 43, who referred to money as "just trash" and began throwing fistfuls of it into the air.

At the trial, he said he began working to save the planet after being laid off from his job in San Diego. He said he was inspired by "Ishmael," a novel by environmentalist Daniel Quinn and by former Vice President Al Gore's documentary "An Inconvenient Truth."

A magistrate ordered a doctor's evaluation for Lee, but court records do not immediately indicate the result. Lee was convicted by a jury and served two weeks in jail. He was also ordered to stay 500 feet away from Discovery headquarters.

Laura Fountaine, a Discovery employee, told CBS Radio News she was returning from her lunch break when she heard a gunman was in the building. She said there's a daycare center located on the first floor of the building.

"I came out with a lot of the nursery babies; they had like cribs of babies that they were rolling out across the street," said Fountaine. "I just couldn't believe this was happening. This doesn't happen. Everybody likes Discovery. Why would this be happening here?"

Melissa Shepard, 32, of Peterborough, N.H., a consultant who works there during the week, said she was on the third floor in a large room with several other workers when someone announced over a loudspeaker that there was a situation in the lobby and people should stay at their desks.

After some time, they were told to move to the other end of the building. She said she was among a dozen workers who huddled into an office, shut the door and turned off the lights.

Then she said someone knocked on the door and told them to leave the building. She said there was some confusion as they were told to go to an upper floor or down the stairs.

(Above: A man believed to be hostage-taking suspect James Lee is seen protesting the Discovery Channel in 2008.)

Dolan said he was heading to lunch with a co-worker when he heard there was a situation in the building.

He was told to go back up to the top floor, the ninth, and lock the door and turn off the lights. Eventually the workers were herded down a stairwell and told to go home.

"Everyone was very scared, but at the same time ... I think people were calm and collected and responded as one would expect in this situation," said Dolan, 28.

When he got to the bottom floor, he saw shattered glass near the company's daycare and suspected it was broken to get the children out. He later got an e-mail that all the children were safe and had been taken to a McDonalds.

All major roads into Silver Spring have been sealed off.

Discovery Communications Inc. operates cable and satellite networks in the U.S., including The Discovery Channel, TLC and Animal Planet. Discovery shows include "Cash Cab" and "Man vs. Wild," and TLC airs "American Chopper" and "Kate Plus Eight."

The Discovery building was part of a major redevelopment of once-troubled Silver Spring during the 1990s.