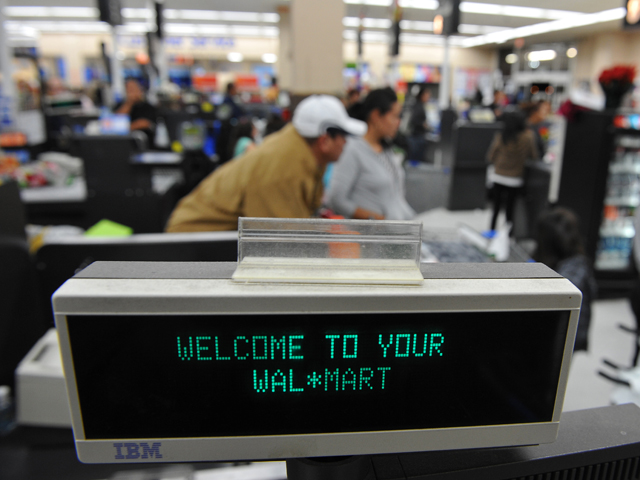 The plaintiffs allege that Bentonville, Ark.-based Walmart knowingly placed point-of-sale terminals beyond the reach of disabled customers at many of its more than 200 stores in California - in violation of state law and the U.S. Americans with Disabilities Act.

The lack of accessible payment devices makes it difficult or impossible for disabled customers to independently pay for goods with a credit or debit card, according to the lawsuit. Many must ask cashiers to read the charges, enter their personal identification number or PIN or sign on their behalf to authorize the transaction.

The plaintiff's attorney Bill Lann Lee said Walmart "should be an industry leader, not a defender of discrimination."

"Point-of-sale machines are the wave of the future in American retail. They should be accessible, convenient and secure to use for all customers," Lee said.

Walmart spokeswoman Ashley Hardie could not comment on the lawsuit itself, but she said the company is committed to serving customers with disabilities.

"Our goal is that every point-of-sale machine be accessible within the regulations of the (Americans with Disabilities Act) and California law," she said.

The lawsuit was filed in U.S. District Court in San Francisco by the Berkeley-based Center for Independent Living and two disabled individuals. They are represented by the groups Disability Rights Advocates and Disability Rights Education and Defense Fund.

"I feel unsafe when I check out at Walmart," said plaintiff Janet Brown, a wheelchair user from Pittsburg. "I can't reach the payment device on my own, read the display screen, enter my PIN or sign the screen to complete the transaction. I have to share my private PIN with the cashier, which I hate to do."

The plaintiffs are seeking class-action status for the lawsuit so that it could cover all disabled people who have had trouble using payment devices at Walmart stores in California.

The lawsuit, which attorneys say is the first of its kind, seeks unspecified damages and the installation of accessible payment machines at the company's California stores.

Hard-to-reach credit-card readers are common at retail stores throughout the world, but disability advocates say they are launching their campaign to change that by targeting Walmart, said Arlene Mayerson, directing attorney at the Disability Rights Education & Defense Fund.

"Why Walmart? Because they are the biggest retailer in the world," Mayerson said. "They should be able to do it right."