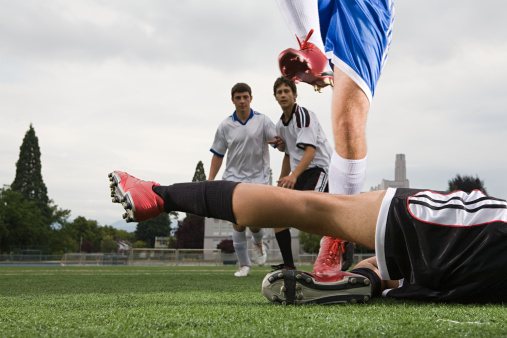 Playing sports should be a healthy and fun way to spend time for kids, and yet every day almost 3,400 young people sustain sports injuries that send them to the emergency room. Too often, a new survey suggests, injuries happen because kids are playing dirty -- and coaches may not be doing enough to stop it.

The new report, released by Safe Kids Worldwide, surveyed 1,000 young athletes, 1,005 coaches and 1,000 parents. One in four young athletes in the survey considered it normal to commit hard fouls and play rough to "send a message" during a game. And about one third of the kids said they had been injured as a result of dirty play from an opponent.

Meanwhile, one in four coaches surveyed in the report said that they don't do anything in particular to prevent injuries to young players during practice or games.

"Despite greater public awareness about youth sports safety, we still found an alarming gap in what is being done to keep young athletes safe while playing sports," the authors of the report wrote.

Overall, 90 percent of the athletes participating in the survey said they had been hurt while playing a sport, with 37 percent of the injuries involving sprains or strains, 24 percent dehydration, 13 percent broken bones, and 12 percent concussions or head injuries.

Last year, 1.24 million children age 19 and younger went to the ER for sports injuries, according to the Consumer Product Safety Commission.

The survey found 54 percent of young athletes said they had played while injured. Some of the reasons they gave for doing so included being needed and not wanting to let the team down; not wanting to be benched; or the importance of the game in question. Four out of ten said they had hidden or downplayed an injury so they could continue playing.

The report also found that almost three-quarters of the athletes reported having been yelled at by a coach, and of those, 40 percent said it made them to want to quit the sport. Some of the kids also said being yelled at by a coach made them feel embarrassed in front of their friends on the team, frustrated, "small and belittled."

"Playing sports safely isn't about limiting kids, it's about keeping athletes healthy and injury-free so they can keep playing to their greatest potential," Kate Carr, President and CEO of Safe Kids Worldwide, said in a statement. "Teach kids to speak up when injured, put an end to dirty play, and empower coaches with tools they need to be effective and keep kids playing safe and strong."

"We need more education, not just for coaches, but for parents and athletes, too," Jack Crowe, former NCAA football coach, said in a statement. "There are steps we can take to prevent most serious injuries, and one of the most important is to give athletes a chance to heal when they do get hurt."