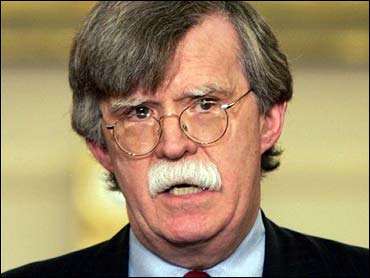 President Bush personally came to the defense of his embattled nominee for United Nations ambassador on Thursday, telling reporters that despite mounting criticism, John R. Bolton deserved to be confirmed by the Senate.

"He is the right man at the right time for this important assignment. I urge the Senate to put aside politics and confirm John Bolton to the United Nations," Mr. Bush said.

But Bolton's fate grew even murkier, as one of the president's own former ambassadors, told CBS News Correspondent Gloria Borger that Bolton had been less than truthful in his recent confirmation hearings.

The episode revolves around a speech Bolton gave in South Korea in the summer of 2003, in which he said, "For many in North Korea, life is a hellish nightmare."

When asked about the hard-line speech, Bolton said Ambassador Thomas Hubbard had approved it.

"I can tell you what our ambassador to South Korea, Tom Hubbard, said after the speech. He said, "Thanks a lot for that speech, John. It'll help us a lot out here.'"

Well, that's not what Hubbard says. In fact, the ambassador told CBS News that he specifically objected to the tone of the speech and actually found it unhelpful in dealing with North Korea.

"I told the committee that if you're basing your vote on his (Bolton's) assertion that I approved his speech, that is not true," Hubbard said.

And there's more. Hubbard also told CBS News about Bolton's explosive temper, recalling how Bolton slammed the phone down after learning he couldn't get a meeting he wanted. Then Bolton backed out of a dinner in his honor that night.

"The temperament was on display," the ambassador said.

President Bush, however, continued to stand by Bolton, calling his nominee, "a good man."

Mr. Bush blamed partisan bickering in the nation's capital — "where sometimes politics gets in the way of doing the people's business" — for a delay in a Senate committee vote on Bolton, even though that delay came about only after several Republicans joined Democrats in forcing it.

Sen. Lincoln Chafee, R-R.I., said he is troubled by Bolton's behavior and wants to discuss it with other Republican senators.

Earlier, Chafee had said he would vote for Bolton, albeit with reservations. He sits on the GOP-led Senate Foreign Relations Committee, which is considering Bolton's nomination, and could deny Bolton the panel's recommendation with a "no" vote.

"We need to talk about it. I want to hear what (colleagues) have to say," Chafee said.

The White House "has been in touch" to lobby him, he added.

Allegations of abusive personal behavior and possible instances of misuse of his government power derailed the committee's vote on Bolton on Tuesday. A new vote is probably three weeks off, giving Democrats time to investigate new charges and the White House time to lobby disaffected Republicans.