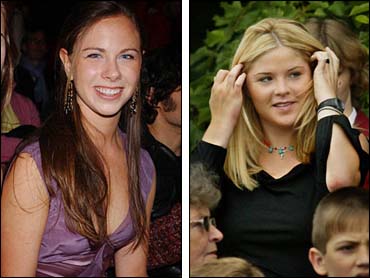 They haven't quite flown the family nest yet, but there's no denying it: Jenna and Barbara Bush are moving on to adult pursuits.

Barbara Bush is to receive Monday a degree in humanities from Yale University - her father's alma mater. President Bush won't be at the ceremony - a decision he announced earlier, saying security precautions for his presence would disrupt the event.

Citing the same reason, Mr. Bush also skipped Saturday's graduation ceremonies at the University of Texas, from which his English major daughter, Jenna, received a degree.

Jenna didn't show up either, but both father and daughter did turn out for a weekend party in Austin, Texas, given by the Bush family in honor of Jenna's graduation.

A spokesman for Laura Bush says daughter Jenna Bush skipped her graduation ceremony at the University of Texas because she "decided she didn't want to go."

He says there's "no other reason," and adds it's fairly common for students at large universities to pass on the pomp and circumstance.

Less than half of the eight-thousand graduates sought tickets.

One graduate says Jenna "probably didn't want the attention and the Secret Service and everything."

The president flew to New Haven Sunday night, for a visit to the dean of Yale, a few doors down from a residence where Mr. Bush's father lived when he was an undergraduate in the 1940s.

Later, about 50 demonstrators waved signs opposing the war in Iraq as the presidential motorcade wended through the New Haven campus on the way to a party for Barbara. "Iraq equals Vietnam," said one sign as demonstrators yelled at the motorcade.

Speaking on campus at Yale, filmmaker Ken Burns denounced the war in Iraq during a speech that was part of day-before-graduation festivities on the Yale campus. Helicopters that were part of the presidential security detail circled overhead as Burns spoke.

Mr. Bush isn't the only busy one in the family. Jenna and Barbara both have busy post-graduation schedules, with plans to travel a bit with friends, and then join the Bush re-election campaign this summer.

They got a head start of sorts last month, when they joined their parents in a visit to wounded GIs at Fort Hood, Texas.

Then there's the question of careers.

As a result of tagging along on a presidential visit to Africa, Barbara is considering working with AIDS victims.

Jenna meanwhile is considering a career in education.

They've got a little time before they have to decide, and in the meantime, both women are turning up the light on their public image a notch.

They'll do both a photo shoot, and sit for their first interview.

Vogue Magazine is the chosen forum.

The interview is expected to be published in August.

Mr. Bush got a little extra attention himself over the weekend, as a result of falling off his mountain bike on Saturday, suffering cuts and scrapes on his face, right hand, and both knees.

As he traveled around New Haven Sunday, the president appeared to be none the worse for wear.

The Democratic presidential candidate had his own scrape with indignity earlier this month, when he fell while riding his bicycle with Secret Service agents in Concord, Mass.

Kerry fell when his bike hit a patch of sand. He was not injured.