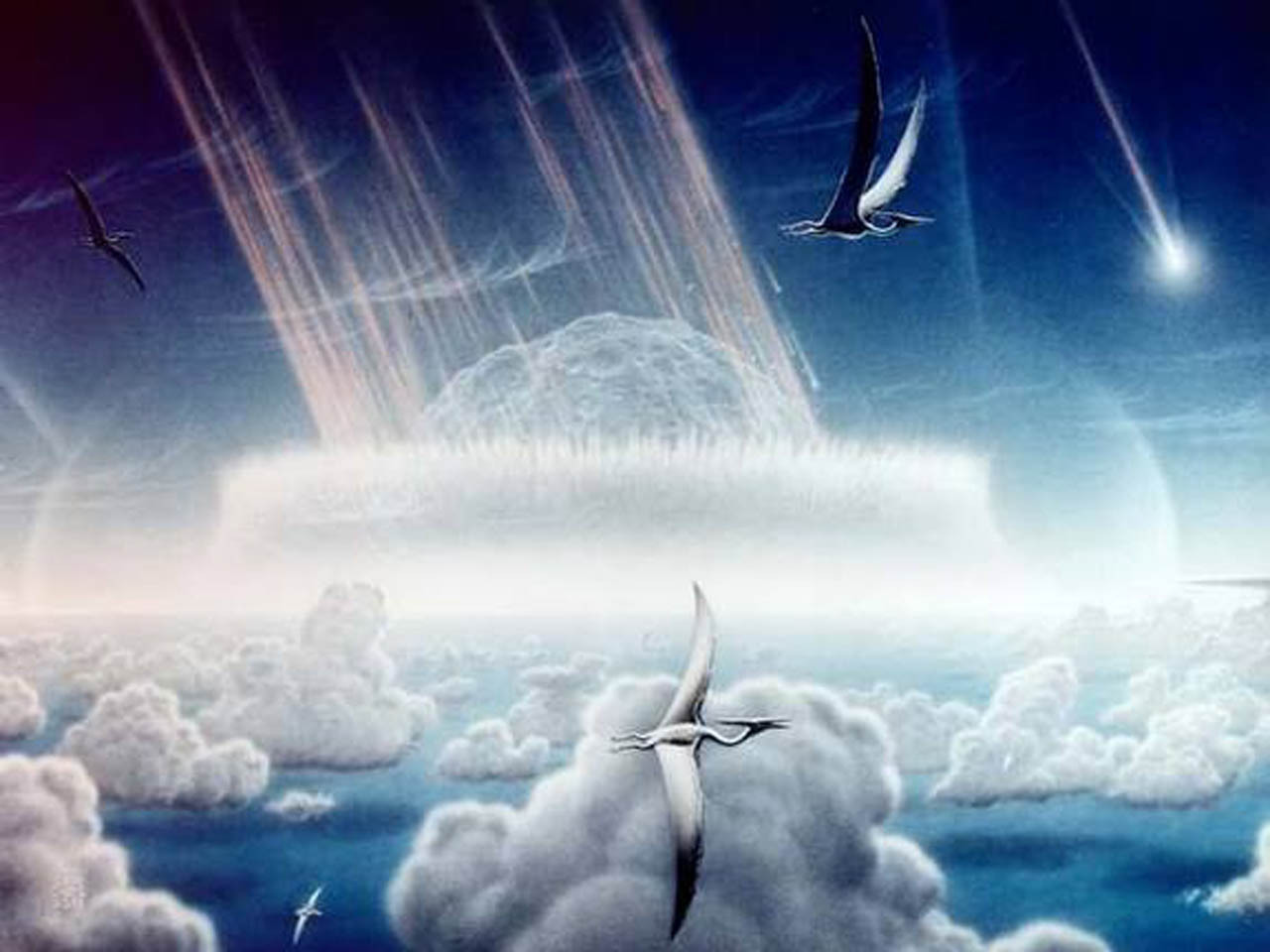 New research pinpoints how the torch passed from one dominant creature on Earth to another, from the brutish dinosaur to the crafty mammal.

Two studies published Thursday in the journal Science better explain the Earth-shaking consequences of a catastrophic cosmic collision 66 million years ago when a comet or asteroid smashed into the Gulf of Mexico.

The crash seemed to end the reign of the dinosaurs. And it gave way to the age of mammals that probably started with a cute squirrel-like critter and eventually led to us, the researchers report.

"I think it's fair to say, without the dinosaurs having gone extinct, we would not be here," said Paul Renne, director of the Berkeley Geochronology Center, who led the research on the dinosaurs and cosmic crash. The dinosaurs' disappearance "essentially releases the little timid mammals to become the big guys."

Renne demonstrated how the timing of the cosmic crash exquisitely matches the disappearance of the slow-footed dinosaurs of Jurassic Park fame. His findings provide more evidence for the theory that an extraterrestrial crash was most responsible for the extinction of dinosaurs.

Scientists have long thought that there were 200,000 years between the big crash and the end of the dinosaurs, but Renne's more detailed examination of fossils and soil at Hell Creek in northeast Montana puts the two events within 32,000 years of each other. That strengthens the case for the space crash as the "straw that broke the camel's back" and killed off the dinosaurs, said Renne.

He said other environmental factors, such as a changing climate from volcanic eruptions, also had made life harder for the dinosaurs, but that the big final dagger was the giant collision that caused a now-filled crater more than 100 miles wide at Chicxulub, on the coast of the Yucatan peninsula.

"The asteroid really rang the bell of the planet," said Smithsonian Natural History Museum Director Kirk Johnson, who wasn't part of either study, but praised them both. Together they showed how that one event "had a profound impact on the nature of organisms that live on this planet."

Dinosaurs are a distinct grouping of species, some of which evolved into birds. Scientists don't know how long it took for the large non-avian kinds like Tyrannosaurus Rex to die off.

The second study painstakingly details the family tree of the most predominant type of mammal, those that give birth after a long gestation period. The researchers propose that the first such mammal was a shrewish critter slightly bigger than a mouse with a nasty set of teeth. And it first popped in the world a little more than 65 million years ago - just after that cosmic crash.

When an asteroid or comet hits Earth and kills off the dinosaurs, it's both a tragedy and an opportunity, said Maureen O'Leary of Stony Brook University and lead author of the mammal study: "In some sense, we are a product of that opportunity."

O'Leary's team looked at 4,541 different characteristics of mammals still around and extinct and traced their DNA and their physical features back until it seemed there was a common - and hypothetical - ancestor.

It was smaller than a rat, but bigger than a mouse and likely ate insects.

That first mammal evolved over the years into all sorts of different types, eventually including bats, whales, elephants and primates like us.

"Boy, did a lot happen in about 200,000 years," said study co-author Michael Novacek, curator of paleontology at the American Museum of Natural History in New York.

Unlike the slow-witted dinosaurs, which weren't known for their ability to adapt, mammals in general are more intelligent and can adapt well, O'Leary said.

Scientists examining ancient plants had already estimated that just before the dinosaurs died off world temperatures plunged by about 10 degrees Fahrenheit, causing a loss of many species. Then when the asteroid or comet hit, material spewed into Earth's atmosphere causing temperatures to spike, before dropping again.

Princeton University scientist Gerta Keller, who has been one of the most vocal critics of the impact theory, said the new work still doesn't resolve her doubts. She notes it only looks at soil in Montana.

Renne said there are no impact records anywhere else that are different from what he found in Montana.

Where did Facebook go wrong in Cambridge Analytica scandal?