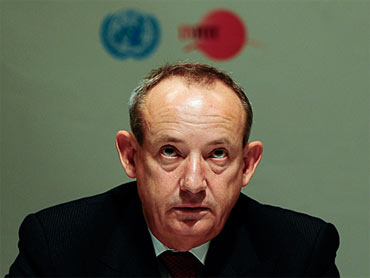 Outgoing U.N. climate chief Yvo de Boer shot down expectations of a climate treaty this year, saying Monday that a major U.N. conference in December would yield only a "first answer" on curbing greenhouse gases.

His comments came just five months after the hyped Copenhagen climate conference failed to yield much progress despite efforts by world leaders, including President Barack Obama.

De Boer said the next major U.N. climate conference in Cancun, Mexico, in December will "not provide an answer that is good enough."

He was speaking to reporters at an international climate meeting in Koenigswinter, near Bonn, the former German capital.

"A good outcome of Cancun will be an operational architecture on climate change," he said. "And then we can decide on a treaty."

De Boer said he expects such an international climate treaty before the end of 2012, but even that will "not be the definitive answer to the climate change challenge."

De Boer's assessment comes five months after the troubled U.N. climate change conference in Copenhagen. That meeting was originally intended to produce the international treaty that has been in the works since 2007. Instead, it showed a great rift between industrialized nations, new economic powers like China, and developing countries.

Germany and other countries have said they have not given up on a deal in Cancun. Germany and Mexico are hosting the meeting in Koenigswinter of more than 40 ministers and high representatives, which is aimed at getting the U.N. negotiating process back on track.

However, de Boer said these negotiations will take some time.

He said what the Cancun conference can produce are decisions on sticking points of the envisioned treaty, such as cutting greenhouse gas emissions, financial aid from rich to poor countries, technology transfers, or measures to preserve Earth's forests.

Such a "functioning architecture" would provide nations worldwide with tools to fight climate change and "increase the level of ambition," he said.

In Copenhagen, nations did agree that global temperatures must not rise above 2 degrees Celsius (3.6 degrees Fahrenheit) in comparison with preindustrial times. In order to achieve this, scientists say industrialized countries need to cut their emissions of heat-capturing gases such as carbon dioxide by 25-40 percent compared with 1990 by 2020, and developing countries must enter a low carbon path.

De Boer said industrial nations have started to act, but are not yet doing enough.

Also, while nations in Copenhagen agreed on a fast-start $30 billion financial aid package, poorer nations need assurances that this package actually consists of new and additional funds, he said.

By 2020, the annual help needs to be shored up to $100 billion and richer nations need to say how they are going to do that, he said.

"There will be no action without a great deal of funding," he said.

The three-day meeting in Koenigswinter called the Petersberg Dialogue is intended to build trust between the nations badly disillusioned by the weak outcome of Copenhagen, Germany's Environment Minister Norbert Roettgen has said.

It is also trying to make some progress on the components of the future treaty and to come up with concrete projects on which to spend the $30 billion aid - be it on emissions reduction or on dealing with the alarming consequences of climate change such as droughts, floods, or storms.