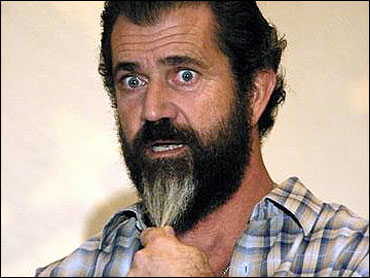 Despite an apology by Mel Gibson, Hollywood insiders and the star's fans sought more details about his reported anti-Semitic tirade during an arrest for drunken driving and whether sheriff's deputies gave him preferential treatment.

Gibson's publicist, Alan Nierob, would not elaborate beyond an apology Gibson issued Saturday in which the star admitted he uttered "despicable" things to deputies.

"I acted like a person completely out of control when I was arrested," the actor said in that statement. "I disgraced myself and my family with my behavior and for that I am truly sorry."

A leaked arrest report quoted Gibson as saying "The Jews are responsible for all the wars in the world," and asking an arresting officer, James Mee, "Are you a Jew?"

It's not the first time some have alleged Gibson is anti-Semitic. Some critics thought his movie, "The Passion of the Christ," blamed the Jews for the death of Jesus.

"I think that now, though, even people who gave him the benefit of the doubt at that time are thinking, 'Wow, maybe he really does believe this,'" People magazine Editor-at-large Jess Cagle told CBS News' The Early Show. "It's a real dichotomy between the way he behaved on Friday morning and what people see when they deal with him."

The entertainment Web site TMZ posted the document, which it said was four pages from the original arrest report. Harvey Levin, the reporter who first obtained the notes, told CBS News correspondent Vince Gonzales that the notes said Gibson was belligerent and attempted to flee. After being handcuffed, he allegedly also told the deputy he owned Malibu, before beginning a barrage of anti-Semitic remarks.

Sheriff's officials have declined to comment on Gibson's alleged remarks, but as Gonzales reports, the sheriff's department initially said Gibson was arrested without incident or special treatment.

The Office of Independent Review, a department watchdog panel, has opened an investigation into whether authorities tried to cover up Gibson's alleged inflammatory comments, said its chief attorney, Mike Gennaco. Sheriff's deputies have many of Gibson's statements and actions on tape, Gonzales reports.

"Assuming that the report was excised, then the question is was it done for a good reason within regulations," he said.

Gibson, a Roman Catholic, has filmed public service announcements for Los Angeles County Sheriff Lee Baca's relief committee dressed in a sheriff's uniform. Levin told CBS News he believes the department changed reports and covered up for Gibson because of his support for Baca.

"There is no cover-up," Baca told the Los Angeles Times. "Trying someone on rumor and innuendo is no way to run an investigation, at least one with integrity."

In his statement, Gibson said he has struggled with alcoholism and had taken steps "to ensure my return to health."

TMZ also reports that Gibson has been stopped by police two other times, once three years ago when he was allegedly driving 74 miles per hour on Pacific Coast Highway and another time about a year ago when he was driving above the speed limit on the same highway. Both times, sources told TMZ that deputies let him go.

Abraham H. Foxman, national director of the Anti-Defamation League, called Gibson's apology "unremorseful and insufficient." Foxman also called on Hollywood executives to "realize the bigot in their midst" and "distance themselves from this anti-Semite," the Los Angeles Times reported.

On Sunday, some in Hollywood debated whether Gibson's career could recover from the scandal.

"It's a nuclear disaster for him," said publicist Michael Levine, who has represented Michael Jackson and Charlton Heston, among others. "I don't see how he can restore himself."

"Usually it comes down to the marketing of the movie and does the average person want to see the film," Dergarabedian said.

Gibson, 50, won a best-director Academy Award for 1995's "Braveheart," and also starred in the "Lethal Weapon" and "Mad Max" films, among others,

In recent years, he has turned his attention to producing films and TV shows through his Icon Productions. His last major starring role was in the 2002 film "Signs." He played a supporting part in the 2003 film, "The Singing Detective," which he also produced.

The hundreds of millions of dollars he made producing the 2004 film "The Passion of the Christ" has given the star the ability to finance his own films, giving him a measure of independence from the major studios.

Days before the release of "The Passion of the Christ," Gibson's father, Hutton Gibson, sparked controversy when he told an interviewer that the Holocaust was mostly "fiction."

"I think his peers are reading it as Mel is a very disturbed guy. His father probably filled his head when he was young with all this crazy anti-Semitic stuff, and maybe when Mel drinks he starts spouting that stuff out," Cagle told The Early Show.

"I have a feeling we will see him go into rehab," Cagle added.

Gibson's next project is "Apocalypto," a movie about the decline of the Mayan empire that is being distributed by The Walt Disney Co. The Walt Disney Co. also, through its ABC television network, has a development deal with Gibson's company to make a miniseries about the Holocaust, the Los Angeles Times reported.

Rabbi Abraham Cooper, associate dean of the Simon Wiesenthal Center, urged Gibson to drop the Holocaust project, telling the L.A. Times it would be "inappropriate."

Gibson is expected to appear in court Sept. 28 on his misdemeanor DUI charge, the newspaper says.