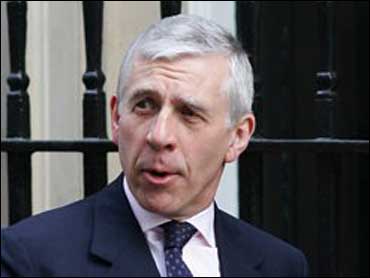 Two London papers have speculated this weekend that complaints by President George W. Bush forced a British minister from his post because of his opposition to the use of nuclear force against Iran.

The Independent suggests that a phone call from the U.S. president to British Prime Minister Tony Blair led to the removal of Foreign Secretary Jack Straw Friday.

The newspaper reports that friends of Straw believe Mr. Bush was extremely upset when Straw pronounced any use of nuclear weapons against Iran "nuts."

Both The Independent and the Guardian write that Straw's "fate was sealed" after a White House phone call to Blair.

Straw played a key role in more than two years of talks between Tehran and the European trio of Britain, France and Germany aimed at resolving the standoff over Iran's nuclear program. Negotiations broke down earlier this year when Iran said it was resuming its uranium enrichment activities.

With the confrontation likely to grind on, Straw appeared more reluctant than Blair to consider military action and may have been unwilling to put aside such differences a second time.

Blair and Straw denied they disagreed on Iran, both said no one was talking about an attack on Iran.

Blair reshuffled his Cabinet Friday, a day after his Labour Party took a pounding in local elections. The Labour Party pulled 26 percent of the vote to the Conservatives 40 percent, a result that renewed calls from some quarters for the prime minister to step down.

Straw, 59, regularly described military action against Tehran as "inconceivable," a word neither Blair nor U.S. leaders would use.

In an interview with the British Broadcasting Corp., Straw called reports that Washington had contingency plans for a tactical nuclear strike "completely nuts."

Straw said Britain would not launch a pre-emptive strike on Iran and he was as "certain as he could be" that neither would the United States. He said he has a high suspicion that Iran is developing a civil nuclear capability that in turn could be used for nuclear weapons, but there is "no smoking gun" to prove it and rationalize abandoning the plodding diplomatic process.

"The reason why we're opposed to military action is because it's an infinitely worse option and there's no justification for it," Straw said.

Straw came to his job as Britain's foreign secretary with little experience in international relations, just months before the Sept. 11 attacks opened a new era in world affairs.

He played a central role in making the case for war in Iraq and has struggled since to help stabilize the country. But he privately questioned whether the U.S.-led invasion was wise, according to the so-called "Downing Street memos" leaked last year.

The Foreign Office, home to Britain's foreign policy mandarins, has always tussled with the prime minister for control over decision-making on international affairs. Blair, for whom foreign policy has been a central concern, may have felt Straw was too sympathetic to the diplomats' preference for negotiated solutions and wary of his own tougher stance and that of his close ally, Mr. Bush.

"Jack Straw was a little more skeptical about the Iraq war than Tony Blair," said Martin Bright, political editor at the left-leaning New Statesman magazine. "Also Jack Straw was a focus of power in the (Labour) Party, he had his own power base, he was a potential rival to the prime minister."

Straw now becomes leader of the House of Commons and takes responsibility for overhauling the House of Lords and campaign finance reform, two big issues. The parliamentary post, a clear demotion, was also where his predecessor, Robin Cook, was parked after Blair replaced him with Straw in June 2001.

She has no foreign policy background beyond her participation in international talks on global warming, but is an experienced politician deeply loyal to Blair.

The foreign secretary's reservations about invading Iraq featured prominently in the Downing Street memos, written in 2002 and leaked last year.

Straw wrote in a memo to Blair that he would have a tough time convincing the Labour Party that a pre-emptive strike against Iraq was legal under international law.

"We have also to answer the big question: what will this action achieve?" he wrote. "There seems to be a larger hole in this than on anything."

Nonetheless, he filled his role as the public face of Britain's foreign policy and had warm relationships with successive U.S. secretaries of state, Colin Powell and Condoleezza Rice.

U.S. State Department spokesman Sean McCormack said Rice's farewell call to Straw "was from her perspective, I think, a bittersweet call. ... She had no better or closer colleague than Jack Straw."

Straw, known as a canny politician, counted his role in helping Turkey start entry negotiations with the European Union last year as one of his proudest achievements in office. He said building close ties with the moderate Muslim nation was crucial to encouraging it to remain friendly to the West rather than turning to extremism.