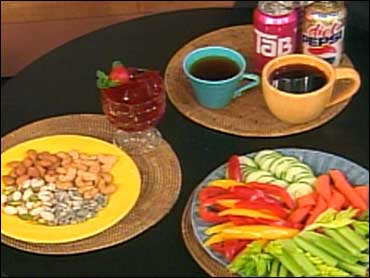 Tom Valenti, a New York City chef known for his Upper West Side fine-dining restaurants "Ouest" and "The West Branch," thought his culinary life was doomed to boredom when he was diagnosed with diabetes 14 years ago.

However, he's since discovered it's possible to eat well and still keep salt and carbohydrates to a minimum.

But can diabetic cooking be for everyone?

Valenti thinks so -- especially if you want to eat healthy.

Valenti compiled his favorite diabetes-friendly recipes into a new cookbook, "You Don't Have to Be Diabetic To Love This Cookbook." He visited The Early Show Tuesday with some of its recipes.

Valenti got a surprise after he was diagnosed: He realized that some of the techniques he already used in the kitchen -- for example, using a lot of acidity, brightening dishes with lemon juice and vinegar -- are actually healthy ways to cook.

"Beyond discovering how useful my standard operating procedures were for my new scenario, I found that very often honoring the limits of diabetes simply meant rejiggering the proportions in a dish, emphasizing proteins and vegetables over pastas, legumes, and so on," Tom writes in the book.

There is no "diabetes diet." Each person with the disease -- and there are almost 24 million people in this country who have it, according to the American Diabetes Association -- follows a different regiment based on his or her health and lifestyle. However, general diet guidelines include cutting back on carbs, and lightening up on fats and sodium.

In general, soups are a great option for many diabetics.

"For the most part," Tom writes, "they're primarily made up of liquid, which means that a bowlful can really tamp down the appetite without the intake of huge amounts of, well, anything. ...Soups and stews are also among the most leftover friendly categories of food. Many soups can be refrigerated for a few days...This means they can be prepared in advance for entertaining."

Basically, this is fish cooked in tin foil -- very easy, very flavorful. Tom's fish chapter is the longest in the book, again because fish is more healthful than poultry or meat.

That's right, you can still eat pasta and be mindful of your diabetes! The secret is moderation. Here, pasta is being presented as a midcourse, not a main course. Also in this recipe, Tom thinly shaves asparagus and tosses it with the pasta, making it appear that there is much more pasta in the dish.

It's great for a party because you pound out the chicken, fill it with the cheese and other ingredients, and then roll it in plastic wrap. The chicken can then be refrigerated or even frozen until you are ready to serve it. You simply drop the plastic-wrapped chicken into a pot of simmering water, which means you are cooking with absolutely no fat like oil or butter. Be assured that the heat of the water will not melt the plastic or cause it to taint the chicken.

Orange Pot De Crème
There is a dessert chapter in Tom's book as well. Many are fruit-based, allowing him to incorporate natural sugars instead of refined sugars.

Stuffed Chicken Breasts with Basil, Goat Cheese, and Sun-Dried Tomato
This is a fun, flavorful meal to have on tap: You pound out a chicken breast, fill it with goat cheese, basil, and sun-dried tomatoes, then roll it up and wrap it in plastic. The prepared chicken can be refrigerated or frozen until you're ready to gently poach it in boiling water, slice it, and serve. It's as right for an everyday meal as it is for a dinner party, and its convenience is compounded by the fact that after the chicken has been cooked and sliced, you can enjoy any leftovers cold the next day.

This recipe calls for cooking plastic-wrapped chicken in simmering water. Be assured that the wet heat of the poaching liquid will not melt the plastic or cause it to taint the chicken.

1. Put the goat cheese, sun-dried tomatoes, and basil in a bowl, season with the salt and pepper, and stir together with a rubber spatula just until well combined.
2. Sandwich 1 chicken breast half between 2 sheets of plastic wrap and use a meat mallet or the bottom of a heavy pot or pan to gently pound it to a thickness of about ½ inch. Repeat until all of the chicken breast halves have been pounded, then discard the used plastic wrap.
3. Place a clean 12 by 18-inch piece of plastic wrap in the center of a work surface. Arrange 1 pounded chicken breast half in the center. Spoon one quarter of the goat cheese filling in the center of the chicken and roll the meat up around it. Wrap the plastic tightly around the chicken and wind the ends of the plastic wrap over and over, as though wringing out a towel, until the chicken breast forms a cylinder and the ends of the plastic wrap don't come undone when you release them. Repeat with the remaining pieces of chicken and filling. (The filled chicken can be refrigerated for up to 24 hours or frozen for up to 3 days. If frozen, thaw in the refrigerator overnight. Let come to room temperature before proceeding, but do not let uncooked chicken rest at room temperature for an extended period of time.)
4. When you're ready to cook the chicken, fill a large pot three quarters full with water and bring to a simmer over medium-high heat. Poach the wrapped breasts in the water until the chicken turns opaque and is firm to the touch and any juices in the packet are clear, about 15 minutes. (To ensure doneness, check for an internal temperature of 165°F with an instant-read thermometer.) Remove the breasts from the water with tongs or a slotted spoon and let rest for 5 minutes before unwrapping.
5. Use a sharp knife or kitchen shears to remove the plastic from the stuffed chicken, taking care not to cut into the meat. Slice each chicken breast diagonally into 1/2-inch-thick slices, arrange the slices of each breast on its own plate, and serve.