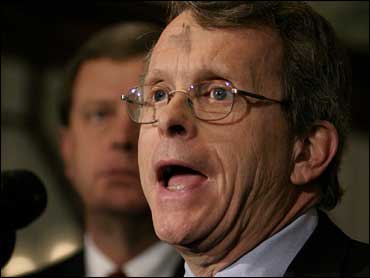 Sen. Mike DeWine is changing the images of the burning World Trade Center towers in a campaign ad that accuses his Democratic opponent, Rep. Sherrod Brown, of being soft on terror.

When the ads debuted last week, Democrats criticized DeWine, R-Ohio, for using images of the Sept. 11 terrorist attacks and the 19 men accused of hijacking the planes in those attacks.

The senator was notified Wednesday by a reporter at U.S. News & World Report that the image of the burning twin towers could not have depicted the actual event because the smoke was blowing the wrong way. He immediately ordered the image replaced with a photograph of the moment, his campaign said.

"The senator thought it depicted the actual events of 9/11, and when he found out that wasn't the case, he wanted an actual picture used," Seitchik said. "I don't think it would be noticeable to the naked eye."

"Mike DeWine has a history of not telling the truth, so it's no great surprise he hired a firm with a similar track record," Brown said in a statement today, the Cleveland Plain-Dealer reported.

The Ohio Democratic Party responded to the DeWine ad with their own Tuesday, decrying the two-term senator for "exploiting images of 9/11 to smear Sherrod Brown."

DeWine's ad and the Democratic response are running on all major broadcast TV stations in Ohio at a cost of $470,000 each.

"Instead of being honest, he's using an ad that at first we knew distorted the facts, and now we know distorted the tragedy; that's shameful," Kuebler said.