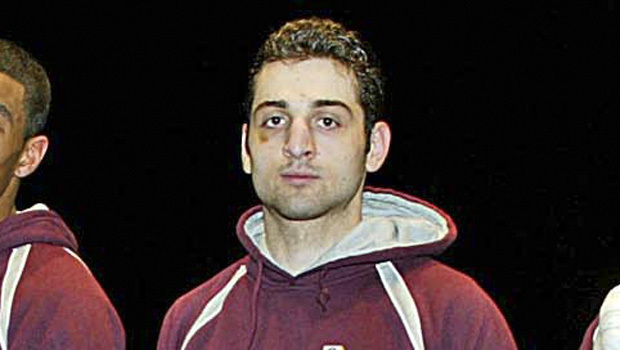 BOSTON -- One of the 2013 Boston Marathon bombers told FBI agents in 2011 that four young men in suits had gone looking for him but never returned and he didn’t know why.

Tsarnaev died during a police confrontation a few days after the April 15, 2013, marathon bombing, which killed three people and injured hundreds. His brother, Dzhokhar Tsarnaev, was captured and convicted at trial. He apologized at his sentencing hearing.

During the bombing investigation the FBI said it saw no evidence of terrorism when it interviewed Tamerlan Tsarnaev.

The Boston Globe said Monday’s report on the April 22, 2011, FBI interview describes what Tsarnaev said about the visit from the four unidentified men and his life in America.

“Tsarnaev doesn’t know why anyone would be looking for him,” said the report, known as a 302.

The report said the FBI agents visited Tsarnaev at his Cambridge home. It said Tsarnaev and another person told the agents the four men had spoken with the other person, whose identity is redacted, and had asked for Tsarnaev. It said the four men didn’t leave any contact numbers but said they’d be back the next day.

In the FBI interview, Tsarnaev, whose father was from Chechnya, described boxing since he was a boy and wanting to box for the U.S. Olympic team but being unable to because he wasn’t a U.S. citizen. He said he didn’t like to fight for the sake of violence.

“Tsarnaev has fought to protect others,” the report said, describing Tsarnaev’s account.

Tsarnaev also told the FBI agents he respected “all religions.” He said he attended a mosque weekly but didn’t have many Muslim friends.

He told the FBI agents he followed news and current events but didn’t look for anything related to extremist views, according to the report.