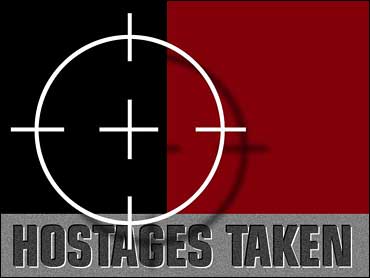 Striking Nigerian oil workers have seized 97 hostages, including 17 Americans, on several offshore oil rigs. Some of the hostages have said that they fear any armed rescue attempts might end in disaster.

There are conflicting reports about whether the hostages have been threatened. One wrote an e-mail that said the hostage-takers warned they would blow up the rigs if attacked, but oil officials dismissed reports that any oil workers had been threatened. A Scottish union official said the strikers appear willing to give up.

The rigs, owned by Houston-based Transocean, were drilling wells on behalf of oil multinationals Royal/Dutch Shell and TotalFinaElf.

"Make no mistake of the danger we're in," one hostage said in an e-mail message read by Jake Molloy, general secretary of the Offshore Industry Liaison Committee, an Aberdeen, Scotland-based labor union which has members among the hostages. "If they have lost everything, they will make sure we lose everything. And that means our lives."

A U.S. source told CBS News the foreign oil workers may not be in any immediate danger. They are not so much "hostages" as they (and anyone else on the oil rig) are being prevented from leaving the platform.

Transocean spokesman Guy Cantwell said late Tuesday those being held against their will include at 17 Americans and 35 Britons.

Western diplomats earlier put the number of American hostages at 21. Some 170 Nigerian "third-party personnel" from other companies who were not taking part in the strike were also onboard, Cantwell said without giving details.

According to Molloy, a British hostage told his wife early Tuesday that the hostage-takers were threatening to blow up the rigs if anyone tried to storm them.

The woman, whom Molloy declined to identify for safety reasons, said her husband did not believe the strikers have explosives. Molloy did not know if the strikers have guns, although he said some hostages said their captors were armed with the installations' firefighting axes.

Nigeria is one of the world's largest oil exporters and the fifth largest producer of U.S. oil imports. Sabotage and hostage takings by community activists, labor groups and thugs are relatively common in the Niger Delta, where nearly all of Nigeria's oil is drilled. Hostages rarely are harmed.

About 100 hostage takers, who work on the rigs, have been holding the workers since April 19. But it was not immediately clear why the hostage-takings were not announced until Tuesday.

Transocean announced April 22 that a strike had begun but did not mention captive workers. Other oil companies in the past have preferred to deal with such crises out of the glare of media coverage.

The strikers are protesting a decision by Transocean to use boats instead of helicopters to ferry them from company rigs about 25 miles offshore the restive Niger Delta state of Rivers, said Joseph Akinlaja, secretary-general of Nigeria's largest oil workers' union.

The strikers were also angered by company threats to discipline five union members, said Akinlaja, adding that his union is not supporting the strike.

The U.S. source told CBS News a handful of workers had been dismissed for "fiscal malfeasance."

Transocean chief executive officer Robert Long described the negotiations as "delicate," and expressed hopes the standoff would be peacefully resolved "within a week." He dismissed reports that any expatriates had been threatened.

Thirty-four people were allowed to leave two rigs by boat Monday, according to Transocean spokesman Guy Cantwell. Two were Transocean employees, while the others work for third-party service companies.

He could not confirm the nationalities of those who left. It was also unclear whether 97 hostages were originally taken - or if that was the number still held after Monday's release. The rigs are about 25 miles off the West African nation's coastline.

Many of the strikers had signaled they would be willing to end their standoff but wanted assurances first they wouldn't lose their jobs, Molloy said.

Cantwell said the 100 striking workers are being served with court injunctions. Molloy feared the court papers could be used to justify a security force attack on the facilities, although Cantwell said the company hoped to resolve the impasse peacefully.