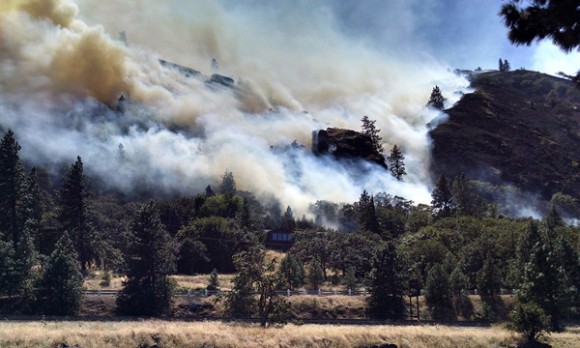 THE DALLES, Ore. -- Authorities say the wildfire burning in Oregon's Columbia River Gorge about 75 miles east of Portland has destroyed a home, damaged two others and is threatening 740 more.

Residents of more than 140 homes have been told to evacuate and nearly 600 households have been put on alert in the community of Rowena near The Dalles.

The official information page for the Rowena Fire on Facebook says the fire covered about 5 square miles by Friday morning with a forecast of low humidity and high winds increasing the danger.

The fire started Tuesday in brush and forced hundreds of people to flee. Many were allowed to return home Thursday, but the flames continued to spread despite the efforts of more than 400 firefighters.

CBS affiliate KOIN reports that firefighters from the Portland metro are part of the containment effort. Oregon Gov. John Kitzhaber was scheduled to arrive in Rowena Friday to receive an update on the fire, the station reported.

Firefighters shot video from the ground on Thursday as they worked to save mobile homes from the Rowena fire:

Connie Thomasian Thomasian and her husband watched from a nearby park Wednesday with neighbors as helicopters dropped water around the house and firefighters put out hot spots on the steep hillside. At one point, there was "a burst of flame" and it looked like the battle had been lost, she said on Thursday.

"It was frightful," she said. "I just disconnected myself from it, and thought, 'I'm putting this in the hands of the firefighters and luck.' "

Returning to the house Thursday, she found a charred softball, but the ranch house and a storage shed were untouched. Trees and grass were blackened within 30 feet of the house.

In northern Idaho, five structures have been destroyed and 160 threatened by a wildfire burning on 64 square miles of mostly grass on the east side of the Snake River across from Oregon and Washington. Big Cougar Fire spokesman Tom Rhodes said it's unclear if the destroyed structures are homes or outbuildings in the remote area accessible only by boat. Residents have been told to evacuate.

In Washington state, Gov. Jay Inslee on Thursday asked President Barack Obama to declare parts of eastern Washington a major disaster area because of wildfires that have destroyed more than 300 homes this year. A declaration would provide federal assistance to help families, business owners and local governments recover from the wildfires.

In California, a man was charged Thursday with starting last year's massive Rim fire, which burned hundreds of square miles of Yosemite National Park and the Stanislaus National Forest.

A grand jury in Groveland, California, returned a four-count indictment against Keith Matthew Emerald, 32, alleging he started a fire Aug. 17, 2013, and it spread beyond his control. Federal prosecutors said temporary fire restrictions in place at the time prohibited fires.

Emerald, from Columbia in the Sierra Nevada foothills, is also charged with lying to a federal agent by saying he did not set the fire. A call to his attorney, federal public defender Janet Bateman, was not immediately returned.

Biden: Hurricane Ian "could be the deadliest hurricane in Florida's history"
Thanks for reading CBS NEWS.
Create your free account or log in
for more features.
View CBS News In
CBS News App Open
Chrome Safari Continue
Be the first to know
Get browser notifications for breaking news, live events, and exclusive reporting.