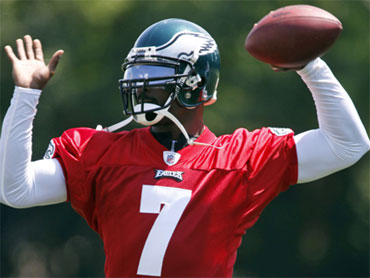 The Philadelphia Eagles' sponsors are standing by their team. That doesn't mean anyone is ready to put extra money in Michael Vick's pockets.

The Eagles had prepared for a backlash after signing the convicted dogfighting ringleader last week. But while Vick is disgraced in the court of public opinion - the one that drives lucrative endorsement deals - his addition has not jeopardized the team's corporate support.

None of the more than four dozen Eagles sponsors had pulled out as of Wednesday, said Marlyse Fant, Eagles vice president of sales and service.

The Eagles heard from about 15 to 20 sponsors on Friday, a day after Vick signed, but most simply wished they had been given advance notice to pass on to their customers.

"Our clients have been in close contact with us to stay up to date on information coming from the team, and most have noticed a significant reduction in their own volume of customer inquiries since Friday," she said on Wednesday.

The Eagles took a proactive approach, sending a letter to their top customers last week asking them to have faith that the team was not acting recklessly.

"We appreciate the complexity this creates for some partners and premium clients and ask that you join us in our support and optimism for Michael as he commits himself to showing Philadelphia and the country he is a changed human being," team president Joe Banner said in the letter.

Reaction from Eagles sponsors has varied. Radio rights holder 94-WYSP said it has had "little to no reaction" from the station's sponsors. PepsiCo Inc. said in a statement that Vick's illegal activities were "cruel and degrading" but backed the team.

"As sponsors of the NFL, we have the utmost confidence that the senior leadership at the NFL will continue to appropriately address this issue," Pepsi said.

Sponsors understood the move from a football standpoint.

They do not hold the same view of Vick. The brutal nature of his crimes - which included electrocuting, drowning and hanging dogs that underperformed in fights - are not going to fade quickly from the public's memory.

"He's too toxic for most companies to even consider taking a chance on him," said David Carter, who specializes in sports business and marketing as executive director of the USC Sports Business Institute.

Once a $130 million player, Vick was a corporate America favorite as the star quarterback of the Atlanta Falcons. His image was used to market everything from sneakers to sports drinks, usually aimed at the coveted 18 to 34 male demographic.

The Falcons paid Vick $23 million in 2005 and Forbes estimated his total compensation that year at $37.5 million with endorsements.

Only 26 and at the pinnacle of his career, Vick's life and marketability imploded amid the graphic details of a dogfighting operation he helped bankroll and participated in.

One of his most lucrative deals had been with Nike, which signed him as a rookie in 2001 but terminated his contract after he pleaded guilty in federal court in August 2007, ultimately serving 18 months in prison.

Nike offered only a terse comment on Vick this week. "Michael Vick does not have a contractual relationship with Nike. We will have no further comments at this time," the company said through spokesman Derek Kent.

Given the cruelty inherent in dogfighting, and the general public's emotional attachment to pets, endorsements for Vick are almost unimaginable at this point.

"When it comes to athletes' behavior, the fans have very short memories or don't seem to care," Carter said. "This one might prove to be different. It might be forgive and remember instead of forgive and forget, and that's a very big distinction."

Vick isn't being completely ignored, simply because he's back in the NFL. He was on the cover of the Madden NFL 2004 video game and was not included this year only because it was completed before NFL Commissioner Roger Goodell conditionally lifted Vick's suspension.

EA Sports made Vick available as part of a roster update on Wednesday.

"We're not judge and jury," EA Tiburon spokesman Rob Semsey said. "If he's approved by the NFL to come back and be signed by a team, he's just like any other player. We make sure our game is as authentic as possible. Adding Vick was a no-brainer."

Vick's replica Eagles jersey, which retails for $79.99, was the top seller on NFLShop.com as of Wednesday. Jersey maker Reebok did not return calls for comment.

But Dick's Sporting Goods, a Pennsylvania-based company, said Wednesday it is not currently selling Vick's jersey in any of its 300-plus stores.

"It is strictly a business decision, not at all a political statement of any kind. We are only in the business of meeting the needs of our customers," Dick's chief marketing officer Jeff Hennion said. "I personally have not heard any retailers with stores in the Philadelphia area talking up the demand for the jersey."

It's not inconceivable that Vick could one day return as a pitchman, but Carter said Vick first needs to rehabilitate his image. He must follow through on promises to get involved in animal rights' work and the public must believe he is genuine.

"It's going to be a nontraditional type company, one that doesn't mind the controversy," Carter said. "They would enjoy the notoriety and buzz created by signing him. You might see an upstart, maybe an apparel manufacturer with a real edge. But edgy and animal cruelty don't go together. It's going to have be one whose targeted consumers are more interested in his athletic appeal than his overall body of work."