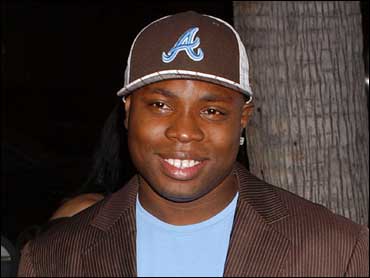 Page Kennedy, who plays a fugitive from the law on "Desperate Housewives," was fired from the hit ABC drama for improper conduct, a series spokeswoman said Tuesday.

Kennedy, a Detroit native who joined the show this season, was let go Friday after a "thorough investigation by the studio" of the allegations against him, publicist Janet Daily said. "Desperate Housewives" is produced by Touchstone Television, part of The Walt Disney Co.

Details of the allegations were unavailable, Daily said. A call by The Associated Press to Kennedy's agent for comment wasn't immediately returned Tuesday.

The alleged misconduct didn't involve another cast member, a source close to the production said, speaking on condition of anonymity.

Kennedy played Caleb, a character shrouded in mystery and seen only briefly as he was held captive in the basement of Wisteria Lane newcomer Betty Applewhite (Alfre Woodard). In the Oct. 23 episode, it was revealed that Caleb may be responsible for a teenager's murder in Chicago.

The role of Caleb is being recast, Daily said. Kennedy's final appearance on the ABC series is Sunday.

In an Associated Press interview last month, Kennedy, 28, said the "Desperate Housewives" role represented the chance of "making a name for myself."

He was so intent on joining the show, he said, that he passed on other jobs, including a recurring role on Showtime's "Barber Shop" and parts on WB's upcoming Rebecca Romijn series, "Pepper Dennis," and on UPN's "Love, Inc."

"I needed this opportunity to play this kind of character," Kennedy said. "It isn't the kind that comes around often and it's usually played by a name (actor). This is an opportunity for me to showcase all the years of training I've had."

Kennedy, who studied at Western Michigan University, had appeared in the HBO series "Six Feet Under" as a football player who died of heat stroke and made his film debut as a bad guy in 2003's "S.W.A.T." He's in the movie "In the Mix," which is set to open on his birthday, Nov. 23.

"Desperate Housewives," among the top-rated series with about 25 million viewers weekly, represents "the biggest exposure I'll have gotten," Kennedy told the AP. He lauded Woodard as his favorite actress, and said the rest of the cast "has been so sweet and nice to me."