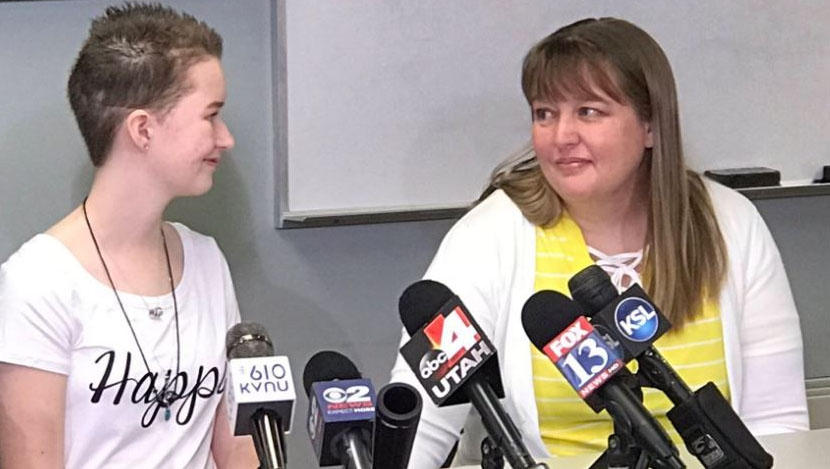 SALT LAKE CITY -- A Utah girl who was shot in the head and left for dead in a canal is leaving the hospital after a two-month stay, reports CBS affiliate KUTV.

“I am so thankful to be here today, to be alive,” 14-year-old Deserae Turner told reporters at a press conference Thursday, her mother and father by her side. “I have been working really hard and still have a lot of work to do. I told my dad I am tougher than a bullet.”

Turner was found with a gunshot wound to the head Feb. 18 in a dry canal in Smithfield, about 90 miles north of Salt Lake City. Smithfield Police say she met two 16-year-old boys at the canal after school that day. Charging documents obtained by the station allege the boys planned to rob Turner and kill her.

Court documents state that both of the boys carried a knife on the day of the attack, and anticipated using the weapon to kill Turner. Police said one of the teens told investigators he brought a .22-caliber handgun as a second weapon “if the original plan failed.”

In an interview with detectives, one of the suspects told investigators the motive for the attack was “greed,” according to the documents. They took $55 from Turner’s purse, tossed her backpack in a trash bin and destroyed her cellphone and iPod, prosecutors wrote.

The two boys have been arrested and charged with attempted murder.

Turner was admitted to the hospital in critical condition and placed in a medically-induced coma. A family spokeswoman said she was “in the fight of her life.”

Since then, she’s made a remarkable recovery, family says.

Turner spoke at the press conference Thursday as she prepared to be discharged from Primary Children’s Hospital in Salt Lake City, wearing a shirt that read, “happy.”

Turner’s father Matt has said the family has felt an outpouring of love and support from the community, evident when the family later arrived at their Cache County home, escorted by police, to streets lined by balloons and ribbons.

“Mostly, we look forward to having our little family together again,” Matt Turner said, crying.