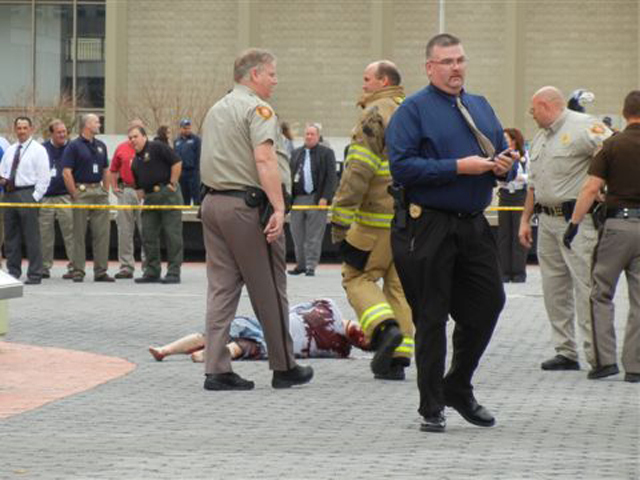 (CBS/AP) TULSA, Okla. - A sheriff's deputy and two other people were wounded Wednesday afternoon during an exchange of gunfire outside a courthouse plaza in Tulsa, police said.

Police spokesman Leland Ashley said authorities responded to a report of a person firing into the air between the Tulsa County Courthouse and the library. Deputies, including the one who was wounded, exchanged gunfire with the shooter, Ashley said.

"During the course of exchange of gunfire, an innocent bystander was hit," Ashley said. He said the injuries to the deputy and the bystander did not appear life-threatening.

No names were immediately released.

According to CBS affiliate KOTV Tulsa, deputies say it was uncertain whether the bystander was hit by the gunman or the authorities.

Emergency Medical Services Authority Capt. Chris Stevens said one man was taken to a hospital in critical condition and that two other people were hospitalized, one in serious and one in fair condition, and that a woman, who was not hit by gunfire, was "shaken up" and treated at the scene.

Library Chief Executive Officer Gary Shaffer told The Associated Press he was returning from lunch when he saw emergency vehicles. A man who appeared to have been shot in the leg was wheeled out of the library by paramedics.

Shaffer said it was unclear if the man, who he said was unconscious, ran into the library after getting shot or if he was shot in the library. There was broken glass in the library from an apparent bullet.

Tulsa County District Court Judges Jefferson Sellers and Rebecca Nightingale told the Tulsa World that they were in courtrooms on the seventh floor when they saw the gunfire exchange. Nightingale said the gunman fired at least two shots at the deputies, and Sellers said the deputies fired multiple rounds back at him after ordering him to drop the weapon.

The newspaper posted on its website photos of the incident taken by library employee John Fancher. He said he looked out a window to see a man with a gun calmly walking around, then casually sit down before deputies arrived.

When shots were heard, people darted for safety in the crowded plaza, Fancher said.

"They were scattering, trying to get in the courthouse as quickly as they could," Fancher said.

Watch video courtesy of KOTV below: