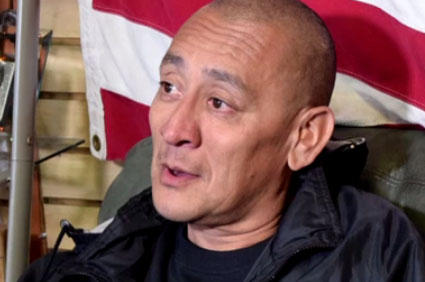 SAN DIEGO -- A former Marine deported to Mexico 15 years ago after being convicted of a minor offense has won his battle to regain permanent U.S. residency and plans to cross the border Thursday with his parents in an emotional homecoming days before Christmas.

Marco Chavez spent his last day packing clothes and taking a red "Radio Flyer" wagon out of storage. He used to pull his sons around in it when they were young and living in Tijuana following his deportation. He hopes to cross the U.S. border Thursday with the wagon, which he would like as a keepsake.

Advocates are calling it a Hail Mary victory, and think it could help as many as 300 others just like Chavez -- U.S. military veterans who've been deported after committing crimes, reports CBS San Diego affiliate KFMB-TV.

He said he got a break in his case when the American Civil Liberties Union found him a lawyer, which led to California Gov. Jerry Brown pardoning Chavez for a 1998 conviction of animal cruelty for a dog beating. Chavez said another person was responsible.

Brown, a Democrat, said Chavez "served our country, earned a pardon and deserves to come back home."

Chavez was a baby when his parents brought him to the United States. He served four years in the Marine Corps and was honorably discharged. He served 15 months in state prison for his conviction and then got deported in 2002, having to learn Spanish and find work in land that was foreign to him.

Chavez said his wife found life too difficult in Tijuana, a violence-plagued Mexican border city where schools are lacking and jobs are scarce. She eventually moved back to the United States, settling with his sons in Iowa after they divorced.

His parents, who live in Los Angeles, would visit regularly. Chavez plans to live with them while he waits for his residency card to be replaced. He then will move to Iowa and try to rebuild a relationship with his children.