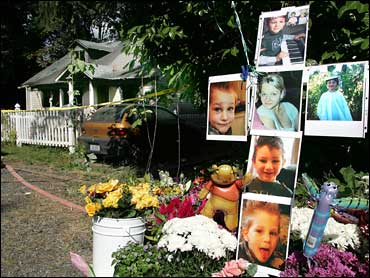 Two women and two young boys found dead after a house fire all died of wounds to the neck, and the fire apparently was set to cover up the slayings, authorities said.

The home belonged to a soldier serving in Iraq, his wife and their two children. The victims were the young mother, the children and her sister, the King County medical examiner's office said Wednesday.

Police in this east Seattle suburb have arrested a neighbor for investigation of arson and homicide in Monday's fire and the four slayings, Police Capt. Eric Olsen said at a news conference. He declined to elaborate on what led authorities to the man.

"We don't have a motive at this time," Olsen said.

When firefighters arrived at the scene Monday, the two-story house was ablaze. Authorities determined the fire was arson.

Sgt. Leonid Milkin, 29, has been granted emergency leave from duty in Iraq, and was expected home with 24 hours, Maj. Philip Osterli of the Washington National Guard said Wednesday.

In addition to Olga Milkin, the victims were identified as her sister, Lyuba Botvin, 24, who also lived in the house, and the Milkins' two boys, Justin, 5, and Andrew, 3.

The women and the older boy died of stab wounds to the neck while the 3-year-old's throat was cut, the medical examiner's office said.

Milkin had been in Iraq since September as a member of the 341st Military Intelligence Battalion.

Army officials were helping the National Guard coordinate a grant for funeral expenses.

The bodies were all found on the second floor, Fire Marshal Grace Steuart said after the fire.