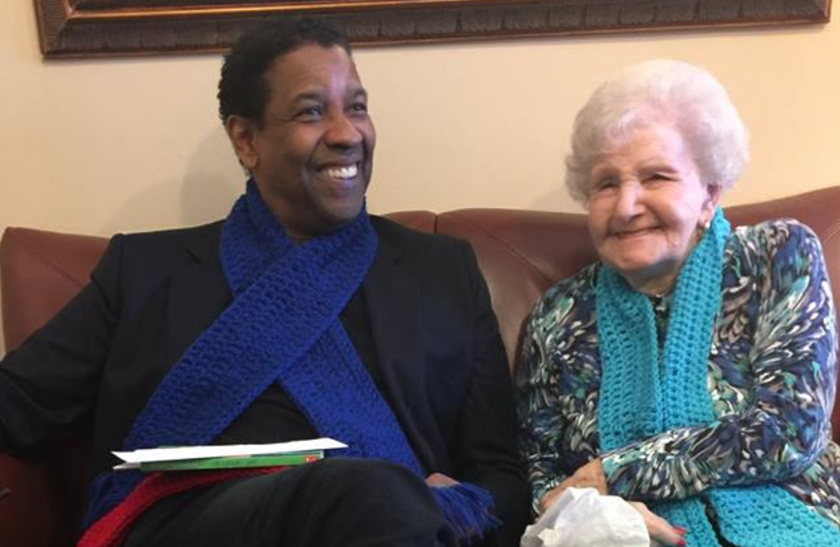 Throughout the nearly 50 years Connie Mauro spent working at the Mount Vernon Public Library in New York, she must have handed out hundreds of library cards to children eager to read.

She had no idea that one of those eager children would grow up to be an award-winning actor.

Denzel Washington was just 7 years old when Mauro handed him his first library card. He never forgot that day, and he never forgot “Miss Connie” either.

Decades later, as Mauro prepared to celebrate her 99th birthday, staff members at Atria Johnson Ferry in Marietta, Georgia, the assisted living facility where she currently lives, decided to give her the surprise of her life.

After several phone calls and pleas to the 61-year-old actor on social media, staff members finally got a response.

“You know you have to fall in love with Connie, you can’t tell her no,” Katie Barrentine, engage life director at Atria Johnson Ferry, told CBS News.

Unfortunately, due to the actor’s busy schedule, it looked like he wouldn’t be able to attend her birthday celebration in November. But he did want to wish her a happy birthday. So, on the day of her big party, Washington called Mauro on the phone.

“You were the cutest kid! I loved you,” Mauro told Washington over the phone. “You were my special library boy.”

“You don’t know how much you helped me. You helped me so much,” Washington responded.

Washington promised Mauro he would come and visit her in December while promoting his news movie, “Fences,” in Atlanta.

Last week, Washington followed through on his promised visit.

As soon as he walked into the home and saw Mauro sitting on a brown leather couch, he sat right down next to her, held her hand and gave her a kiss on the cheek.

“It was like they never missed a beat,” Brooke Munson, executive director of Atria Johnson Ferry, said. “He was funny and endearing, constantly cracking jokes.”

The pair talked for over an hour and a half, reminiscing and catching up. Mauro even made him a royal blue hand-knitted scarf, which, she explained, is a hobby that she enjoys. She donates dozens of scarves to people in need.

Mauro thought of Washington like family. She didn’t understand why everyone was so excited that he was coming to visit.

“She came into my office and said, ‘I just don’t understand why this is such a big deal,’” Munson said. “You have made such an impact on so many people, children’s lives. You may have well had an impression on expanding [Washington’s] love of reading and imagination. You may have helped him decide what he wanted to do, and look at him now! He’s helping other kids and all the other work that he does. It’s all about you.”

Before Washington left the home, he assured Mauro that he would be back.

As he greeted another 99-year-old resident on his way out, Munson recalls overhearing him say, “You never know what’s really impactful. You never know where the world is gonna take you — the impact that they’re gonna have on your life. This lady had a profound impact on my life and here I am. It’s about paying it forward and being kind.”